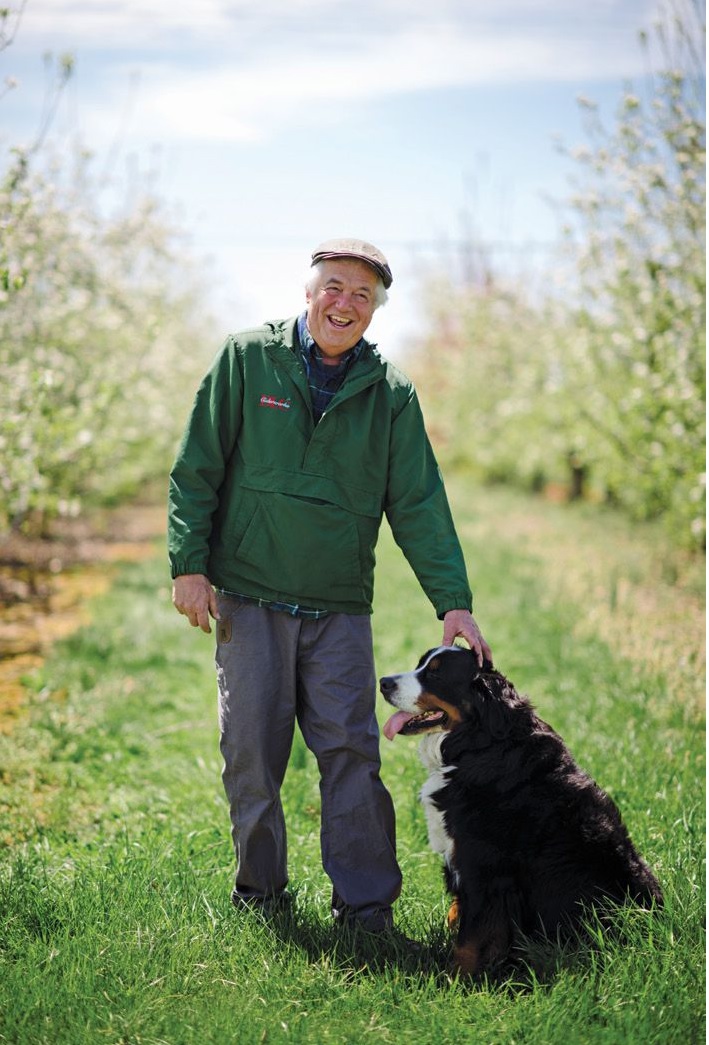 Distillery Lane co-owner Rob Miller and his dog, Kingston, stand among the property’s some 4,000 apple trees.

DISTILLERY LANE CIDERWORKS IS ALL ABUZZ 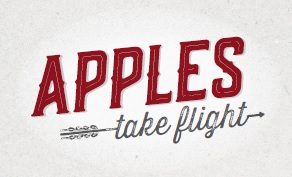 Distillery Lane Ciderworks sits in a bucolic corner of Frederick County—out where the blacktop dips and snakes, the fields and farmland roll, and South Mountain is a hazy blue presence in the near distance. The mailing address is Jefferson, but the 95-acre farm and orchard is just outside historic Burkittsville (yes, the setting for that witchy indie film) and features a stout, 1840s brick farmhouse and an erstwhile dairy barn emblazoned with a big red apple.

Under cloudless April skies, the setting is decidedly Arcadian. And positively sleepy. You’d be right in assuming that autumn is the busiest time here—when the apples are harvested and pressed, and come weekends, day trippers’ cars clog the driveway as folks flock to the tasting room or to buy fresh apples, juice or cider vinegar. But, think about it differently, and spring might be the most bustling and important stretch of the apple calendar. Today, the acreage is literally abuzz with more than 50,000 workers tending to the trees. The bees are on the clock.

“I couldn’t do it without them,” says cidery co-owner Rob Miller as we stroll an orchard row amid branches resplendent with white and pale pink blooms, joined by his gentle-giant Burmese mountain dog, Kingston. “They’re our other employees, critical to us at this time of the year because none of the trees are self-fertile and so have to be cross-pollinated.” 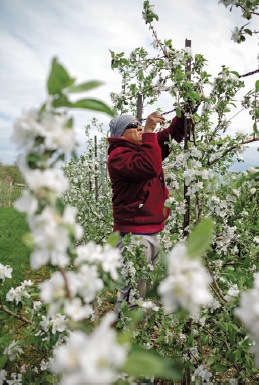 No bees, no apples. Full stop. The hive boxes scattered about beneath the boughs are painted pink, an affectionate touch by the local beekeeper who provides the eager pollinating army each spring. “He calls them his girls,” Miller says. “They’re like his kids and he comes and checks on them every day.”

Next year, Distillery Lane will celebrate its 10th anniversary, though Miller and his wife, Patty Power, have owned the property since 1998, when the pair of white-collar professionals traded the bustle of suburban Bethesda for the country lifestyle—environs where “rush hour” means swollen-uddered Holsteins heading off to milking, not Beltway backups. It’s also an historic area where soldiers in blue and gray camped and skirmished. That the postcard-pretty property exists in rural form today is thanks to the state of Maryland, which bought the property to prevent it from being bulldozed for another subdivision. The state slapped an agriculture easement on the land (requiring it be farmed in some fashion) and offered it up for auction, where Miller and Power began their Green Acres plunge with the highest bid. They kept their city jobs and leased the land for a number of years while figuring out their next move. (Power still has an office job and commutes to D.C. a couple of days a week; Miller retired to the orchard.) They considered opening a winery and even growing ginseng root. 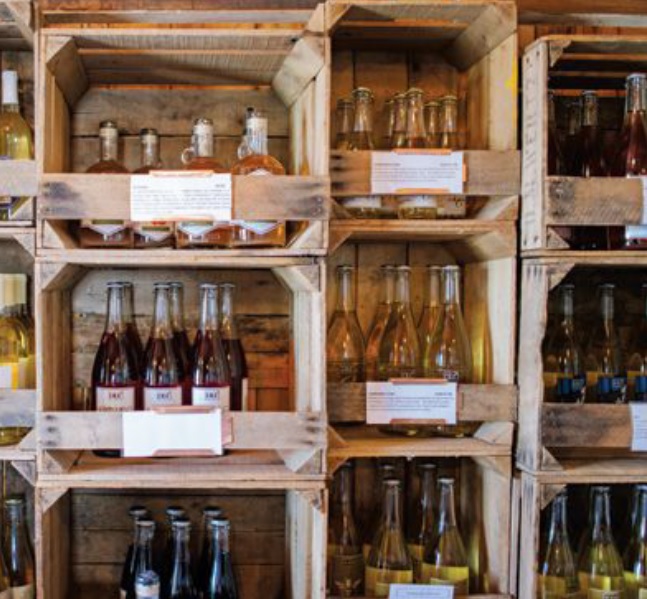 Distillery Lane’s products are bottled by hand and are available for sale in the tasting room area.

“But there were four apple trees on the property at the time, so we started looking into the cider business, which was at the very early stages of growth,” Miller says. When the sandy-loam soil tested perfect for apples, they started ordering trees. Today, they have nearly 4,000 on 10 acres. “A third of the trees we’ve got here are just for cider so their apples are inedible,” Miller says. “We call them ‘spitters’ because they’re really tannic and acidic.” They make great cider because they provide a complex mouthfeel and finish, he says. “But you don’t want to bite into one.” 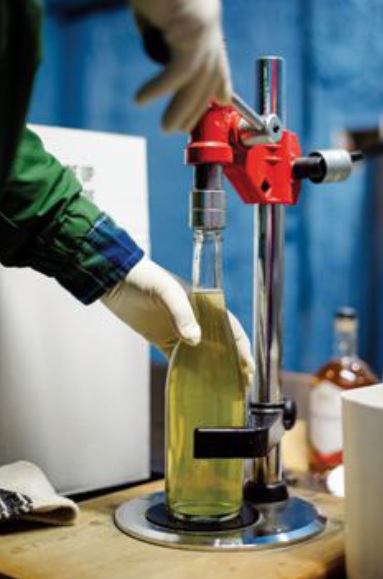 These puckery orbs, whose juice must be mixed with other, sweeter varieties for good cider, go by such evocative names as Tremlett’s Bitter and Porter’s Perfection. Perhaps Distillery Lane’s best cider apple, one that makes an excellent drink all on its own, is Kingston Black (What did you think he’d name his dog after?). Ah, but Mother Nature giveth and taketh away: Kingston trees are persnickety—poor providers that only set fruit every other year. “There’s a reason I don’t plant the whole orchard in them,” Miller says with a chuckle. 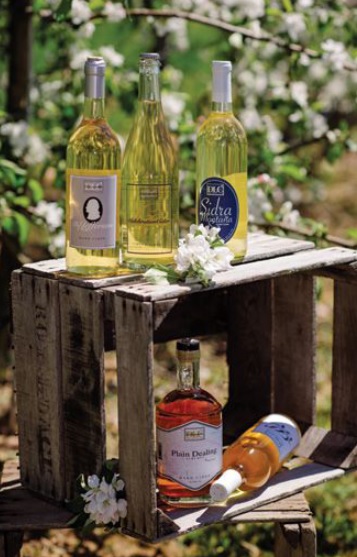 The collection contains some flashy new hybrids fresh from agricultural college research labs, as well as heritage breeds the founding fathers would recognize— literally, as George Washington and Thomas Jefferson where apple growers and cider makers. These golden oldies include Newtown Pippin, Roxbury Russet and Hewes Crab. “I got a call out of the blue from historic Mount Vernon, where they’d heard I have three of the four apples that Washington had grown,” Miller says. “I now sell them the cider that they use to make their historic brandy.”

The art of cider making is largely about blending different types of apples, and for this Miller relies on his cider maker, Tim Rose, whom he met thanks to BURP. (That would be Brewers United for Real Potables, a mid-Atlantic homebrew club focusing on beer, cider and mead. A member, Rose came here looking for apples some years back.) Rose is scientist by day and works for the Smithsonian, Miller says. “And, as a good scientist, he is a record keeper and note taker. So, we’ve fermented every apple in this orchard, and with all the data and notes we have a pretty good sense now of what works with what.”

To get a better understanding of the liquid goods on offer, we leave the breeze-tossed branches and wander over to the tasting room. (Kingston, having received sufficient head pats and neck scratches, opts for a siesta.) Miller provides a quick tour of the adjacent processing room, idle now until the first apples are harvested in late July. The apples are washed before riding a conveyer belt into a contraption where whirling blades reduce them to a thick apple sauce called pomace. This apple gruel is wrapped in special canvas cloths and placed in wooden racks that are squashed by a hydraulic press. The juice leaks out of the cloth and the skin, seeds, and other solid bits stay behind. “It’s called a rack-and-cloth press—old fashioned but it works for us,” Miller says. 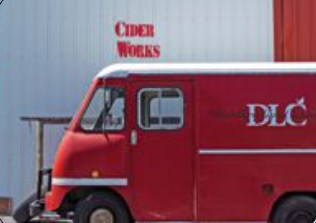 If you think about it, cider is a bit of an odd-glass-out in the adult beverage arena, having attributes of both wine and beer. Like a winery, Distillery Lane grows and ferments fruit and is affected by the weather, which can make or break production. (A brutal hail storm last spring stripped a lot of apple blossoms off the trees.) But hard cider has roughly half the alcohol of wine and its largely British Isles heritage places it more in the beer camp. This poses somewhat of an identity crisis. Though the cidery holds a state winemaking license, Miller says he recently joined the Brewers Association of Maryland. “I think brewery people are more our crowd,” he says. “And the cider world has gotten to be like the beer world, with hundreds of different and new styles.”

Cider essentially comes in two delineations: still or sparkling. One of the bestsellers in the latter category is called Celebration—tart but clean and bubbly. “It’s great before dinner, sort of like a prosecco,” Miller says. A stalwart in the still camp is Scrumpy, a British-style cider, generally cloudy and higher in alcohol, which Miller describes as “sort of a rough cider.” Then there’s Sidra Montana Sur, a Spanish-style offering. “This cider has a sour beer kind of taste to it and is really nice for pairing with funky cheeses,” Miller says. (In the cidermaking process, not unlike sour beers, bacteria are introduced during fermentation to create lactic acid.)

Barrel aging is also a cider thing, and the oak-aged Jefferson cider has a clean, fresh apple taste with the buttery finish you get with chardonnay laid down in wood. Another from the barrel is Rio, with its fascinating backstory relating to the origin of the Distillery Lane name. Dating back to the 19th century, Burkittsville was home to two rye whiskey distilleries. One run by the spectacularly named Outerbridge Horsey IV, and the other by John Ahalt, whose Mountain Spring Distillery (long demolished) abutted the cidery property. Ahalt shipped barrels of his rye to Rio de Janeiro and back, with the thought being that the rocking motion and temperature changes improved maturation. (Not to be outdone, Horsey sent his rye around Cape Horn to San Francisco and brought it back to Maryland by train.) Rio cider is a nod to this heritage and is aged in rye whiskey barrels for a complex taste of apples, honey and oak.

Other fruits and flavors can join the cider party as well. Miller says one of his first wholesale customers was Spike Gjerde of Woodberry Kitchen fame, for whom he makes Woodberry Cider, a bubbly drink with aronia berries in the mix. And for that chef’s waterfront funspot, Sandlot in Baltimore, Distillery Lane developed a lower-alcohol quencher called Sidewinder with organic rhubarb and ginger. Hopped ciders are also being tested. (Cider IPA anyone?)

Miller acknowledges that it was a real leap of faith to create an orchard and cidery from scratch. But business has been good straight out of the gate. Sometimes, too good. Just before Distillery Lane opened in the fall of 2010 as Maryland’s first cidery since Prohibition, the Washington Post ran a story about it, helping to create near pandemonium. Come opening day, Miller says, visitors were parking on the road, his lawn, everywhere. They had 440 bottles of cider to sell and ultimately had to enact a one-per-customer policy. Build it and they will come—drawn to the novelty of it all or just for the pleasant country drive.

“We were opening at like 10 or 11 but there were cars here at 8 o’clock,” Miller recalls. “Everyone was very nice, but I said, ‘all right, you people are here two hours early so I’m putting you all to work.’ I gave them all towels and baskets and we had complete strangers wiping apples and putting them in boxes before the customers came—oh man, was that fun.”

Cider as a beverage category continues on the upswing, with the number of cideries doubling in the past five years, according to the U.S. Association of Cider Makers. And you can’t miss the fact that big players have entered the market, not with all those Angry Orchard ads bombarding the airwaves. Still, Maryland might be a tad behind the curve. Washington, D.C., has a handful of cider bars, as does Richmond, Virginia. There aren’t any in Maryland yet, and the Millstone Cidery in Monkton recently closed (It seems some of the family members behind it are now involved with a cidery in New York State.) Miller says he is selling more and a more cider in kegs, as opposed to bottles, as beer bars with dozens of taps are increasingly inclined to add a cider or two. Not that brewers have to watch their backs now or anything.

“You know, cider is something like oneand- a-half percent of the beer market,” Miller says. “We could double the volume and be at 3 percent and we’d all still be happy.

The bees included if that means more blooming trees.