The whiskey operation known as BlueDyer has been in Ryan Vierheller’s family since the early 20th century. If you’re scratching your head, you’d be right. Vierheller’s great-grandfather ran a bootlegging operation in Stafford, Virginia.

Unlike his ancestor, Vierheller operates his Waldorf distillery completely above board—an approach due as much to his previous career with the Bladensburg Police Department (where he worked with business partner Walker Dunbar), as to the repeal of prohibition nearly a century ago.

The BlueDyer name, however, was hard to resist. “I grew up working summers on my grandfather’s farm in Stafford, and he told me all the old stories of him and his father making and selling liquor,” says Vierheller.

This summer, BlueDyer Distilling Co. Celebrates the third anniversary of selling its first product: barrel-aged gold rum. Since it opened, the only spirits producer in Carroll County has developed quite a following.

“We’re one of three distilleries in the southern three counties,” says Vierheller. “We’ve really been the tip of the spear when it comes to introducing hand crafted spirits to Southern Maryland.”

In 2014, two years after his grandfather died, Vierheller toured a distillery in New York and came away with one thought: “I’m going to go home to Maryland and open one.”

Despite the outward differences, Vierheller says making the move from police officer to distiller involved a lot of transferable skills—most notably the heavy regulation and record-keeping involved. “Walker and I were used to operating under a 5,000-page rule book in the law enforcement world,” he points out. “So we felt like we basically traded one set of regulations for another.”

BlueDyer is on track to more than double last year’s sales. In addition to gold rum, BlueDyer makes dark rum, gin (including a barrel-aged variant) and whiskey. The third batch of its special edition port-barrel finished whiskey will launch just before Thanksgiving this year.

The current whiskey offerings are made with a bourbon mash and aged for a year, and Vierheller hopes to expand to straight two-year or longer versions, he says. “But right now the market is buying our one year as fast as we can get it out the door.”

The brand is available at restaurants and liquor stores throughout Maryland, D.C., and Delaware, but the best place to imbibe is in the distillery’s taproom. You’ll find local food trucks parked outside six days a week and a carefully crafted cocktail menu. Try the Daiquiri’d and Confused, made with dark rum, lemon and lime juice, simple syrup and blood orange saffron shrub; or The Timekiller, a take on the tiki classic, The Pain-killer, but with gin instead of rum. 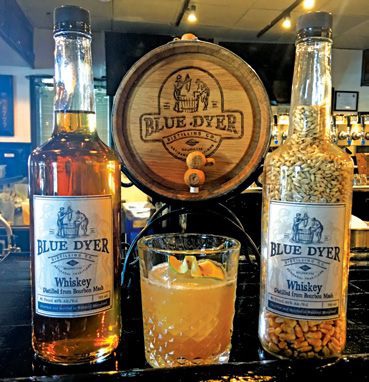 BlueDyer’s whiskey is made from a bourbon mash and aged for a year.

In July, BlueDyer expanded its cocktail program thanks to the passing of the Brewery Modernization Act in the Maryland legislative session earlier this year. The act unlinked tasting room sales, like the cocktails from the distillery tour, Vierheller explains. “It allows you to pour a larger size.” –R.K.