DINNER AND A MOVIE IN FREDERICK JUST GOT EASIER

Walking into the lobby of Warehouse Cinema in Frederick will feel more like entering a craft beer pub or farm-to-table restaurant than a typical theater. The kitschy, ’80s-patterned carpets and neon lights we’ve come to expect with moviegoing are conspicuously absent, replaced with corrugated metal, rustic wood paneling, and Edison bulb lighting. 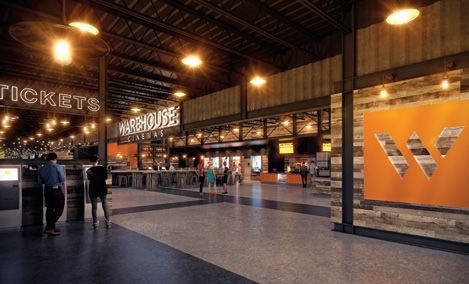 As the former Frederick Towne Mall—vacant since 2013 save for the Home Depot and Boscov’s—begins its renaissance as District 40, it brings a new anchor tenant: Warehouse Cinemas. This entertainment concept combines a state-of-the-art movie experience with local food and drinks.

From Hagerstown-based holding company HighRock Group, Warehouse Cinemas will open in summer 2020 in the former location of Hoyts Cinemas. It’s the first full-service dining and cinema concept to open in Frederick.

“We’re very familiar with this region of Maryland and see tremendous potential in the Golden Mile,” says Greg Mills, HighRock Group co-founder and COO, referring to the stretch of Route 40 on the west side of Frederick, which was designated an Enterprise Zone in 2018. HighRock Group is the former owner of Leitersburg Cinemas in Hagerstown. 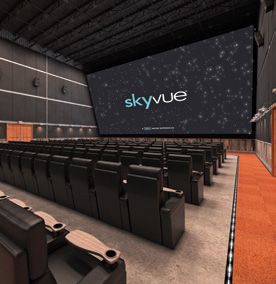 Other than making use of the already existing “bones” for a 10-theater cinema, Warehouse has little in common with the location’s predecessor—or most movie theaters, for that matter.

The bar looks like it was plucked straight from HighRock Group’s Hagerstown sister concept, Warehouse Taproom, as does the food and beverage list. The menu of local beers along with wines and cocktails is made possible thanks to a new cinema license passed through the Maryland House and Senate last spring, which will allow movie theaters in Frederick County to serve alcohol. For the movie theater, that could translate to more than two dozen beers on tap.

In addition to traditional snacks like popcorn and candy, there will be fast-casual lunch and dinner options on a menu currently being developed by Warehouse Taproom chef Leah Stump, known for her creative burgers and wood-fired pizzas.

Each of the 10 screening rooms will have luxury seating with reclining chairs and tray tables that visitors can reserve in advance. The “premium” theaters will be equipped with SkyVUE, a new technology that lifts and tilts the screen for better reclined viewing, Mills says.

“We aim to create a place where people fall back in love with going to the movies,” Mills says. –Rebecca Kirkman