WHERE BREW MEETS U

When you pop the top on a can of Flying Dog Brewery’s Field Notes, you’re doing more than opening a good local beer. You’re also supporting research that encourages the expansion of Maryland’s craft beer industry. 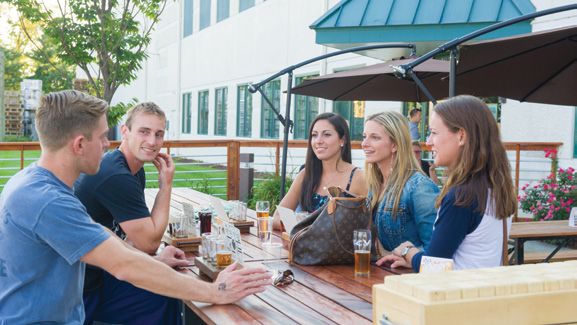 For the past four years, Frederick-based Flying Dog, the state’s largest independent craft brewer, has teamed up with the University of Maryland College of Agriculture to study hop production in the state, identifying the most viable varieties to grow locally and the best growing practices. Field Notes, a limited-edition pale ale released last fall, was created with recently harvested hops; sales of the brew help fund future research at UMD’s Western Maryland Research and Extension Center.

“We’ve had lots of trials with different hop varieties,” says Flying Dog’s Vice President of Marketing, James Maravetz. The team is working to determine what kinds of hops do best in Maryland, he explains. “The idea is to narrow down which types have the most potential for commercial production in the state.”

The collaboration has steadily expanded since its launch and has already yielded useful findings, including pinpointing types of hops that grow most successfully here. Maryland’s climate tends to be more humid and warmer than the Pacific Northwest, where the vast majority of American hops are grown. Given these findings, the university will focus on those varieties moving forward, says Maravetz.

The program was inspired by brewery-university partnerships in Colorado, Vermont, New Hampshire, and elsewhere, where breweries help universities develop courses in brewing and partnerships create fruitful opportunities for research. Flying Dog brewers hope to help set curricula for science programs in brewing and/or distilling at Maryland.

In addition to yielding useful data, the partnership between Flying Dog and the university is a fun one for everyone involved.

“The relationship is very natural,” says Maravetz. “At heart, our brewers are scientists.” While personal preferences are part of the process, he points out, “At the end of the day, it’s all about experimentation and doing it over and over again.”

Science experiments that result in tasty brews and strengthen the craft beer industry? We’ll drink to that. –Kit Waskom Pollard