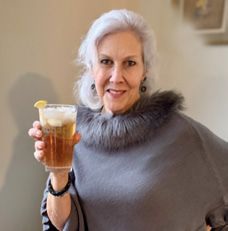 Beth Harbinson loves a good cocktail. One of her favorites is the Salty Sage, below, with muddled Meyer lemons and sage. But Harbinson, who has been sober for 14 years, chooses drinks that are alcohol free, and she is not alone. Whether in recovery, sober-curious, on medication, going dry for health reasons, or the designated driver among friends, roughly 20 percent of adults in the U.S. don’t drink.

Harbinson started Sobar in 2017 after winning a $10,000 award in the Horizon Foundation’s Changemaker Challenge, a Shark Tank-style contest for entrepreneurs with a social mission. For the competition, Harbinson proposed a no-alcohol bar. “I wanted to help reduce the stigma and shame around the disease of alcoholism,” she says. “And also host non-alcoholic events.”

Harbinson recalls visiting the VIP lounge at Merriweather Post Pavilion a few years back. “I’m standing at this beautiful bar, backlit blue,” she says. “My choices are a bottle of water, soda—which I don’t drink—or Red Bull,” a beverage that, she points out, would keep her up all night. She wondered at the time if she should dictate a mocktail recipe to the bartender. “I thought, how cool would it be if there was a bar for people who don’t drink alcohol.”

Options for non-drinkers, says Harbinson, who is also executive director of a Baltimore-based nonprofit, are limited. “I don’t want to go to the bar and ask for a cranberry juice with a splash of seltzer.” Her parents appreciated fine food and drink, she says. “I was raised by a dad who has a wine cellar; I have a palate for things that are sophisticated.”

On New Year’s Eve, Sobar sponsored an elegant, alcohol-free soiree with $100 tickets, a dance party, a fireplace grotto, and a silent auction. Catering was by the Baltimore firm Chef’s Expressions, and the midnight toast was with a distilled, non-alcoholic beverage called Seedlip. The British-based company produces drinks made from herbs, spices, and aromatics and costs $30 for a 23-ounch bottle—plus shipping.

Harbinson believes there’s a market for such high-end, non-alcoholic distilled beverages in Maryland, where more than 100 Alcoholics Anonymous meetings are held each day.

Last year, Sobar set up its bar at Howard Community College’s annual Vino Scholastica, a wine tasting fundraiser for the school. A car dealership wanted to help underwrite the event but didn’t want to contribute to the alcohol component, Harbinson says. Sobar mixed its cocktails and drew a crowd. What’s most surprising, she notes, is people will come to the Sobar bar after they’ve had a drink. “They want to try our cocktails, or maybe they want to taper off before they go home,” she says.

Currently, Sobar is involved in about two events per month, one an open mic night at Root Studio, a Columbia-based maker space. Harbinson’s goal is to promote non-alcoholic mixology through education and bring Sobar to events like Wine in the Woods, the annual festival with wine, food, crafts, and music. “I want to go to that because there are other things to do there besides drink wine,” she says. –Martha Thomas 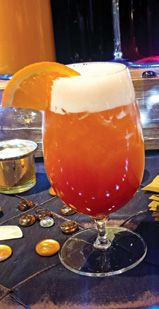 The tart sophistication of Meyer lemon softens the woody sage in this drink, all heightened by flaked salt. Serve with an herbed goat cheese spread or roasted vegetable hors d’oeuvres.

Quarter and muddle the lemon. Add syrup and salt and shake. Top with seltzer and stir. Garnish with lemon wedge. Serve over ice.