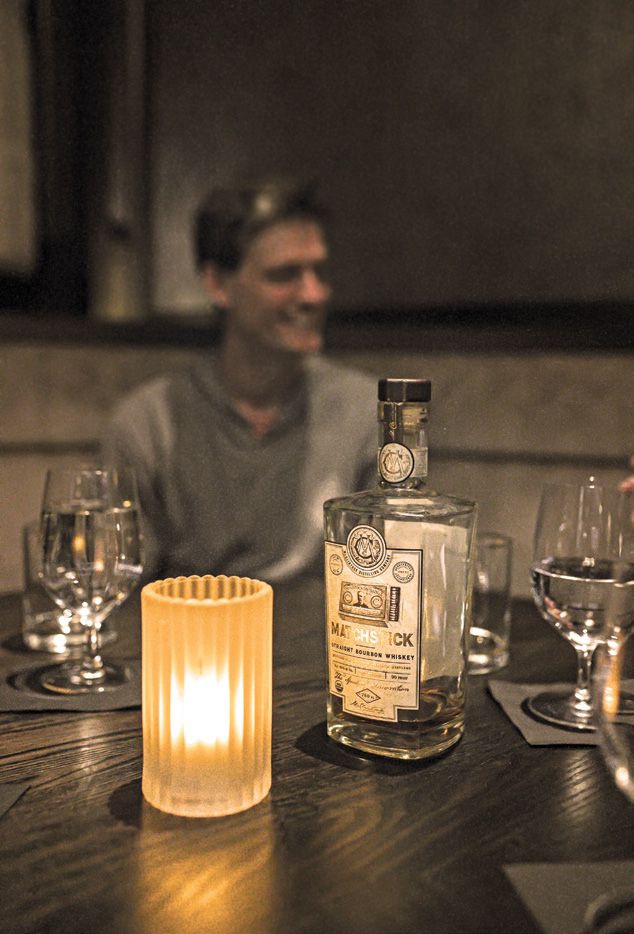 Braden Bumper, co-founder of McClintock Distilling Co., one of the Cured and 18th & 21st suppliers 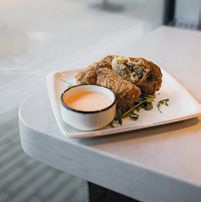 I’m sitting in a dark, opulent bar hidden behind a large wooden door and a towering glass wine cellar, sipping on a negroni made with Frederick’s own McClintock Distilling Co. gin, when I realize I’ve completely forgotten where I am. This could easily be some new hot spot in Baltimore or D.C., but instead, I’m a stone’s throw from Merriweather Post Pavilion and the Columbia Mall’s food court, an area not exactly known for its nightlife.

And that’s just what Stephen Wecker and his father, Steve Wecker, of Wecker Hospitality group, wanted when they envisioned their 18th & 21st and Cured concepts: to bring a big city feel into Howard County.

“We saw how the trends were going in the city,” explains Stephen Wecker, the younger, “and we thought, ‘why not bring that to the county?’” The sister restaurants do just that, making for a choose-your-own-adventure, one-stop-shop for whatever escape customers are in the mood for.

Want to grab a craft beer (14 on tap, most local) or cocktail and a handmade burger in a bright-lit space full of lush wood accents? Check out Cured, the hip-yet-casual spot that focuses on upscale comfort food like addictively gooey cheesesteak eggrolls (they crank out about 300 a week).

But if you’re in the mood for sipping your cocktail in a more upscale, secluded space, then head past the oyster bar to find the semi-hidden door that gets you into 18th & 21st (named after the amendments that enacted and repealed prohibition). There you’ll discover an art-deco-meets-Great-Gatsby era supper club that features nightly live music, velvet-tufted walls, and a nine-seat bar that Wecker claims “is becoming one of the hardest bar seats to get in Howard County.”

Running the kitchen for both restaurants is Brian Thornton, who was voted the Best Chef in Howard County in 2019. “Simple food made great is my main goal with these restaurants,” he says. If the juiciness of the Cured & Dagger (Thornton’s take on the pastrami Cloak & Dagger sandwich invented at Baltimore’s Attman’s Delicatessen) on the menu is any indication of that ambition in action, you’ll want to go back for more, as we did—even with sandwich fixings still dripping all over our fingers. 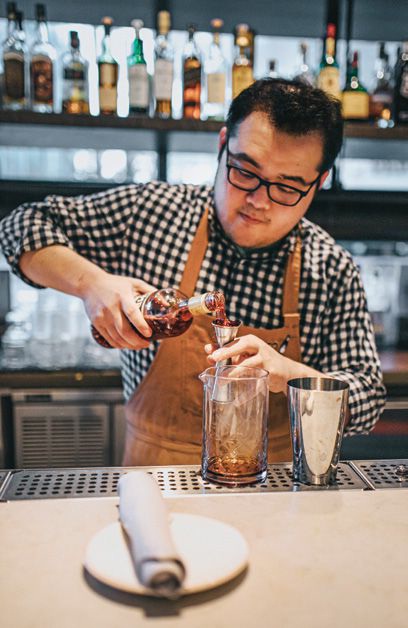 After helping run the popular Iron Bridge Wine Co., which was founded by his dad and uncle in 2003, Wecker thought it was time to look into opening a space that could bring that same passion to craft cocktails, beer, and a food program that influenced urban trends. After searching for two years for a space, Wecker Hospitality finally landed on the up-and-coming Crescent District—the first part of a $5 billion downtown Columbia revitalization project led by the Howard Hughes Corporation. 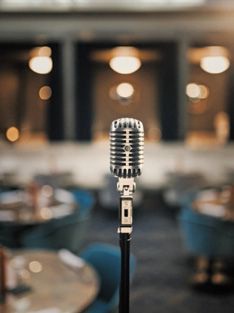 A microphone in the speakeasy.

The buzz in the two spaces seems to hearken a new era for a neighborhood that Wecker believes is ripe for creating new experiences for the community and visitors. The restaurants’ proximity to such venues as Merriweather Post helps. Wecker says they see about 400-500 guests on show nights, and many of those guests return. And it’s not just people coming to see shows at the famed concert venue. “We are seeing a lot of locals,” he says. And that’s just what he’d hoped for. “Ultimately we are focused on being a part of the community.” 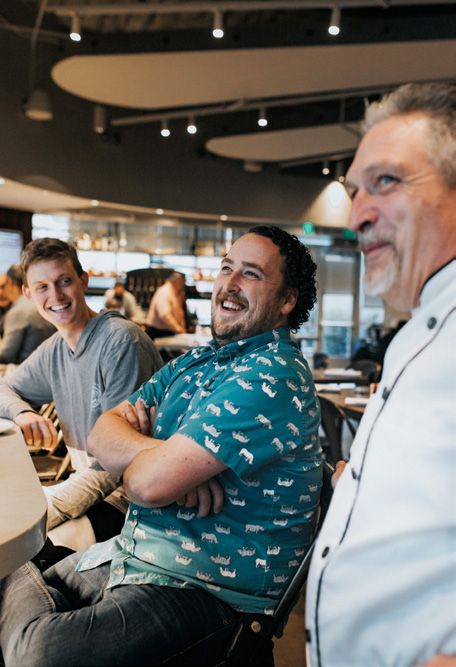 The community focus is embodied in a kid’s book that Wecker hands me. He explains that his father wrote the children’s story, titled Timbo the Turtle and Baltimore’s Peabody Heights Brewery created Timbo Lager, the restaurant’s house beer as an homage to the book. 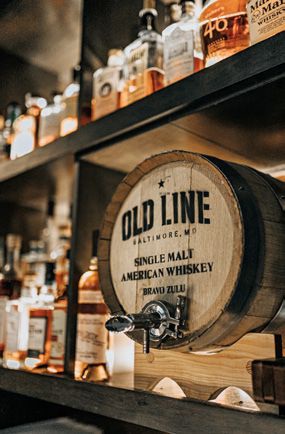 Story is important to the Weckers. “We’re not just telling our stories though, we are storytellers by nature,” says Wecker. “We’re also supporting people who are trying to tell their own stories.” 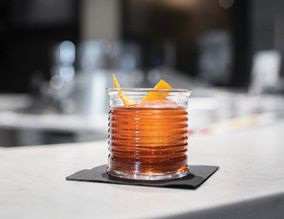 McClintock’s forager gin in its cocktails, like the Negroni

One of those storytellers happens to be sharing our table. McClintock Distilling co-founder Braeden Bumpers has been working with Wecker from the get-go. As Bumpers explains it, McClintock initially set out to produce bourbon, a spirit that needs to age for at least two years (be on the lookout for their Matchstick, Maryland’s first double-gold winning bourbon). So, in the meantime, they produced gin (an oft-maligned spirit due to bad experiences people may have had with cheap stuff) while they waited for the bourbon to mature.

The restaurant interior by Munther Designs

“I was going door to door to bars and restaurants trying to get people to taste our gin, and it was almost like I had to harass people to try it,” Bumpers says with a laugh. This in spite of its status as “the first organically certified gin in the state,” he adds.

Wecker and his staff didn’t need any persuading. After tasting McClintock gin at an event, Wecker took his entire staff to the Frederick distillery to learn how the product is made, sample distillates, and think about how they could incorporate McClintock into their bar recipes. “Younger distillers are doing some of the most innovative things,” explains Wecker, “and when they’re in your own backyard it’s awesome.” 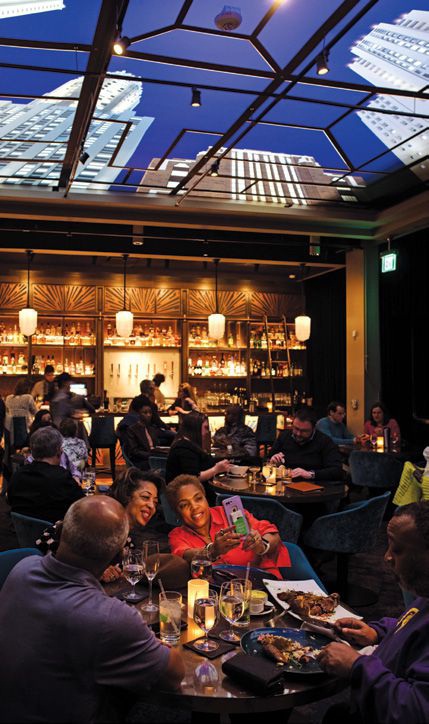 Educating his staff on the products they use is an important part of the restaurant’s philosophy, says Wecker. They, in turn, by passing that knowledge onto their customers, often leads to them trying something out of their norm.

McClintock Epiphany vodka is featured in one of the best brunch cocktails I’ve tasted in some time. Wecker and Bar Manager Kyle Flanagan collaborated on Life’s a Peach using the local vodka along with créme de pêche, Ramazzotti, lemon juice, a sugar cube, and prosecco, a dangerously drinkable upscale take on a Bellini.

Such relationships have been an important factor in McClintock’s success. “We are all production guys and don’t have some massive marketing budget, so we rely heavily on the restaurant and bar owners to promote our products,” says Bumpers. “Without partners like them, we wouldn’t be able to survive.”

For his part, Wecker says finding likeminded farmers, chefs, distillers, and brewers is an important component of its business. “We love discovering new talents and sharing them with our clientele.”