Running a family-owned vineyard and winery requires plenty of roll-up-the sleeves work, as Tony Fiore knows all too well. He’s a grandson of the founders of Harford County’s Fiore Winery, where they also operate a small distillery. But of late his duties have grown to include a new task: being on bug watch. The spotted lanternfly has been spotted in the county. The colorful but invasive pest from Asia feeds aggressively on dozens of different plants and trees—including grapes. (And it likes hops as well, beer lovers.) Entire vineyards have been wiped out by swarms of the insects in neighboring Pennsylvania where they first appeared six years ago.

“I’ve been paranoid since last summer when I heard they made their way into our county,” Fiore says, adding that they’ve been spotted just 12 miles away from his family’s 14-acre vineyard near Pylesville. “I am usually outside in some form every day, so I keep my eyes out for them. The problem is not just limited to the vineyard, but everywhere on the property; from what I understand they especially like to lay eggs in hard-to-see areas and rusty items.”

Both Harford and Cecil counties are now under a quarantine enforced by the Maryland Department of Agriculture that requires businesses to get permits before moving certain regulated items, including plants, construction and landscaping waste, and packing materials. Permits can be acquired after participating in a free online course on spotting and managing the pests.

The inch-long adults are striking, with yellow markings on their abdomens and four wings spotted and splashed with red. However, they are not accomplished fliers. “What they’ll tend to do when they want to try to move around is climb up to the top of a tree or some other high point and then just throw themselves off into the wind to glide,” says Maryland Department of Agriculture entomologist Aaron Shurtleff.

After hatching in April, the bugs pass through multiple nymph phases before reaching the showy adult stage in July. In these early stages, they look like small wingless black, white, and red beetles. Perhaps the most alarming way a spotted lantern fly might infest a new area is via their egg masses, which overwinter and resemble splashes of mud. They can be easily overlooked on firewood, lawn furniture, farm equipment, even vehicles. “We’re thinking people unintentionally moving them around is the main way they’re going to relocate,” Shurtleff says. Hence the quarantine system. 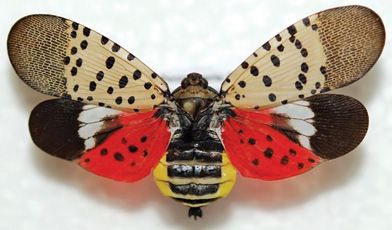 It’s thought spotted lanternflies first came to Berks County, Pennsylvania in a load of stone imported from China. They have no natural predators here—it’s said even chickens won’t eat them. They harm plants in multiple ways: The nymphs and adults use sucking mouthparts to feed on plants while also secreting a sweet substance that can attract other pests and trigger damaging mold growth.

With all this at stake, a little paranoia may not be misplaced. –Brennen Jensen