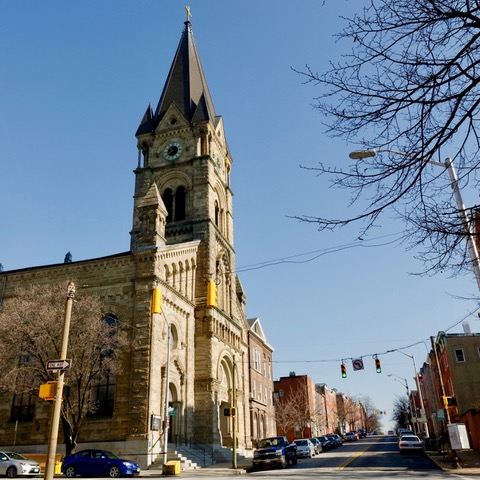 Ok, I never quoted bible verse in a beer story before—but then I’d never visited a brewery that had been desanctified as part of its development.

The space, says Jon Holley, general manager, “Was rendered for profane use—that’s the actual terminology they use.” He’s showing me around the soon-to-open Ministry of Brewing occupying the capacious sanctuary of the (former) St. Michaels Catholic Church in Washington Hill. 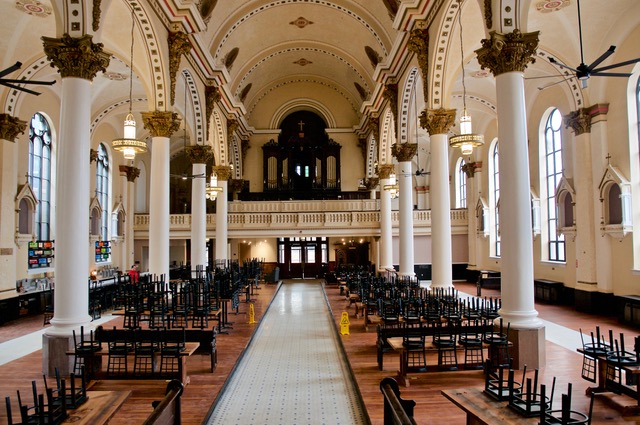 Holy moly, it’s an impressive space–Corinthian columns reaching to a vaulted ceiling, soaring windows (though sans stained glass) and seating for 250 at tables made from salvaged wood. Though removing religious statues and imagery was part of the desanctifying process, there’s Jesus (in mural form) hovering over a 20-barrel brew system where the high altar once stood. And back near the front entrance, a dark wooden confessional booth stands ready to hear someone’s worst. “Everyone says we should turn it into a photo booth but we’re just going to seal it up and let it speak for itself,” Holley says.

As the space transitions from worship to wort boiling, its new overlords are mindful that it was a spiritual center for generations of Baltimoreans where countless weddings and funerals were held. They are conscious not to be too profane now that baptisms have given way to beer taps. 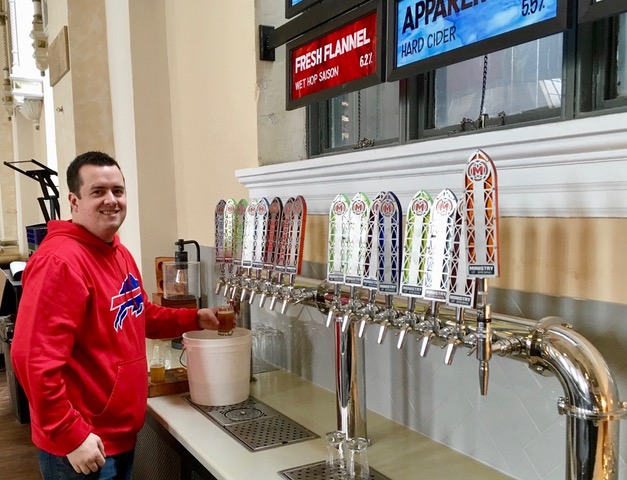 The church dates to 1859 and saw a couple of expansions up through the 1890s as it catered to a swelling German immigrant community in the shadow of its Romanesque bell tower. In its heyday, St. Michaels served more than 2,000 families. By the 21st century, a different tune: With parishioners dwindling and upkeep costs soaring, the archdiocese shuttered the church in 2011 and its future was uncertain. “There was a lot of vandalism when it was empty and there were squatters in here,” Holley says. Plans for rebirth date to 2017 when the sprawling property that includes a school, rectory, and parish hall caught the eye of the development firm SAA/EVI which has since carved up the various outbuildings into 37 apartments. The partnership behind Ministry of Brewing–which includes folks from a distillery/brewery in Cincinnati–leases the sanctuary.

Food will be on offer as well, but until logistics in the designated kitchen space are worked out, they’ll initially rely on food trucks out in the courtyard. Brewing is already underway, with Ministry offerings beginning to pop up at area bars. “We have thirty-two taps so we’re going to try a little bit of everything,” says Holley, a former sales rep at Howard County’s Manor Hill Brewing. “The first few beers we’ve done are all classic styles, for lack of a better term.” 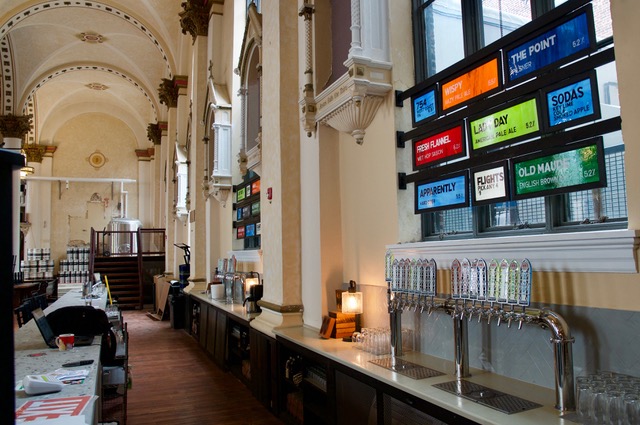 Ministry of Brewing has 32 taps

With this sneak peek, a quickie taste. Six of the Ministry’s 32 taps are active at the moment. The Lady Day American pale, with subtle pineapple tones provided via El Dorado dry hopping, is a nod to jazz diva Billie Holiday who grew up around the corner. The West-Coasty 754 American IPA is named after the right-twice-a-day time the church’s busted tower clock perpetually shows. The malt-forward Old Maude English brown ale is named after a storied B & O railroad locomotive (and given the Cincy connection, a nice way to join two states). While I dig the straight-ahead, largely low-abv offerings, fans of the more out-there stuff, take note: a chocolate sea salt stout is in the offing.

And when will this heavenly new outpost for blessed beer consumption throw open its doors to thirsty congregants? For this, I turn to Romans 8:25, “But if we hope for what we do not see, we wait for it with patience.” 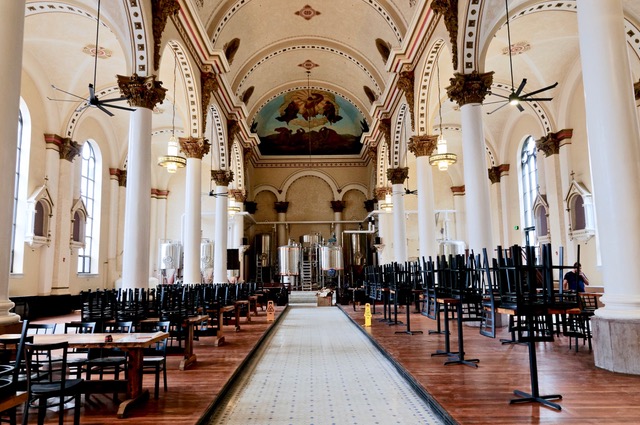