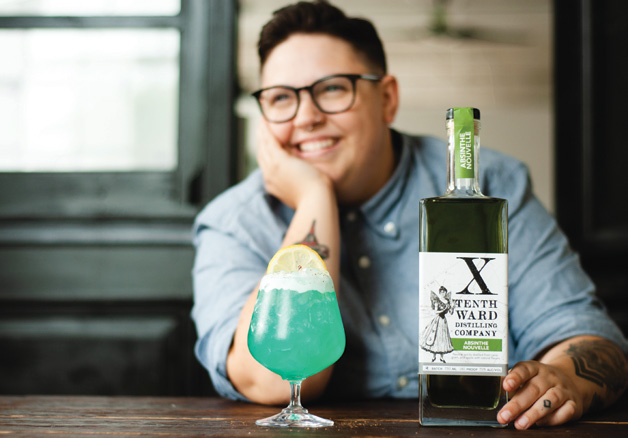 Chelsea Gregoire believes that her education at Liberty University, the Virginia school founded by evangelical pastor Jerry Falwell, was fine preparation for her career in the hospitality industry. “If you look into the etymology of the church, as a house of welcoming and fellowship, a restaurant or bar comes close,” Gregoire points out. “I didn’t have to become a preacher or a teacher to create community.”

Gregoire, who holds both a bachelor’s and master’s in theology, says there was a point when she “jumped off the rules train.”

For the past several years, she’s been heading down another spirit-forward path, managing the bar programs at Ida B’s Table and Topside in Baltimore, and being recognized as a 2018 Eater Young Gun (eater.com’s recognition of young movers and shakers in the restaurant industry). Now, the 28-year-old is general manager and beverage director for True Chesapeake Oyster Co., which opened in October in a renovated mill on the banks of Baltimore’s Jones Falls.

While, as its name suggests, the restaurant and bar specialize in bivalves from the bay, Chef Zack Mills’ menu also includes entrees made with locally sourced fish, beef, and pork, along with seasonal sides. Gregoire says she likes to lurk around the kitchen, sharing ingredients with the chefs and benefitting from the economies of scale. “If I say I want to make a carrot chip for garnish, they offer use of the meat slicer,” instead of the time-consuming mandolin she would have otherwise used—meaning razor-thin carrot discs fly at lightning speed.

Gregoire grew up in Maryland with a mother who would regularly take her to visit the shore and to state parks. “It’s a gift to grow up and live here, near the Chesapeake Bay,” Gregoire says. “Time and human beings haven’t served the bay well. There used to be millions and millions of oysters, and people were eating and dredging until it was almost zero.”

The restaurant gets oysters from its eponymous parent company, which has been building up the oyster population at its farm in St. Mary’s County.

When she first visited True Chesapeake’s restoration site on St. Jerome Creek, Gregoire was moved. “I saw how the grasses were moving, I could see the bay in the distance.” St. Jerome, she points out, is the patron saint of biblical scholars. “I quietly started working on a cocktail called Holy Lagoon, a take on a Tiki drink that conjures mystical waterfronts,” she says. The cocktail (see recipe above) features absinthe from Tenth Ward Distilling—a local maker that fits within Gregoire’s ethos of using Maryland products.

The bar menu is stocked with drinks that celebrate the bay, including a section with shooters—a shot with an oyster in the glass, meant to be downed in one slug. “I started naming shooters after people who work on the water: the Waterman, the Seafarer, the Bay Pilot.” Gregoire says she looks forward to coming up with flavor profiles that complement the day’s harvest. “I view this whole project as being very tied to nature, to where we’re from.” Plus, she adds: “there are the personal ties, which are uncanny.” –Martha Thomas

While Tiki cocktails are generally considered summertime drinks, this refreshing take—featuring Maryland’s only absinthe, made by Tenth Ward Distilling—may give you the tropical vibe you need during the winter months. True Chesapeake’s proprietary rum blend is a well-guarded secret, but go ahead and make your own by mixing three of your favorite rums together.

■ Tenth Ward Absinthe, to taste (my suggestion is a hefty ½ oz. of that deliciousness!)

Add all ingredients into a shaker, and shake vigorously (but not for too long) with ice. Pour all ingredients, including the ice from the shaker, into a chilled glass. Garnish with freshly grated cinnamon and a lemon wheel, and whatever else your heart desires—it’s tiki!