Moonshine on the Horizon

Puerto Rico is known for rum. The island is, after all, called “The Rum Capital of the World,” and some 70 percent of the rum consumed in the U.S. comes from our territory in the Caribbean. Much harder to find on the mainland is pitorro, or moonshine rum, a potent, flavor-infused spirit beloved to those who live on the island.

This unique style of rum was traditionally concocted clandestinely in Puerto Rico’s jungled, mountainous interior. Now, the father and daughter team of Angel and Crystal Rivera are bringing pitorro to an industrial park outside Frederick. Their Puerto Rico Distillery is expected to be open by year’s end. “I was born in Puerto Rico and so was my sister, but we left when we were very young,” Crystal Rivera says. “Now we go back at least once a year and visit with our family there.”

She says her parents were conscientious about keeping the family connected with its culture and history. “As we got older, moonshine rum became part of that experience,” she says. “Its particular aroma is something that instantly takes you back to the island.” But it wasn’t available on the mainland. “We weren’t seeing it in the market here and we were very much missing it.”

So, what differentiates moonshine rum from the average bottle of Bacardi? First, pitorro is powerful—usually over 100 proof. The Riveras are looking to bottle theirs at 106. The main difference, however, is that moonshine rum is flavor infused by aging or curing—often only for a couple of months—with macerated tropical fruits and other ingredients.

The traditional style, Rivera says, has a variety of infused flavors, including raisins, coconut, and prunes. In the craft beverage age, of course, makers are free to push taste boundaries beyond tradition. “I’m pretty sure we’re going to start off slow with maybe three or four different flavors,” she says. “Potentially, we’ll have a tamarind flavor and a coffee one and maybe something like a white grape.”

Not all the Puerto Rican pitorro is made illegally, and the Riveras are being mentored by José Luis Cruz, the founder of the aboveboard Cruz Distillery in Jayuya, Puerto Rico. The assistance will kick in once the Frederick outfit gets its two 200-liter pilot stills up and running. “José is offering to have his head distiller come stay with us for a week or two to make sure that everything is running okay,” says Crystal, who left a position with the National Restaurant Association’s education department to work at the distillery full time. (Her father retired from the U.S. Navy but continues to work as a defense contractor.) 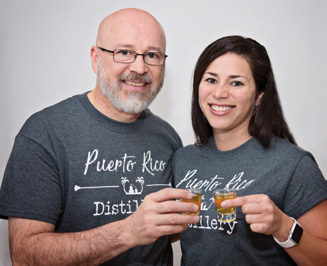 A final pitorro tradition is enjoying it with family around Christmastime. Indeed, Rivera says the Puerto Rican government recently introduced a holiday time amnesty period when moonshine makers can register and legally make rum. “The holidays are definitely a big season for us Puerto Ricans,” Rivera says. And the Riveras are scrambling to be ready in time.