With the passage of House Bill 549 by the Maryland General Assembly, distilleries around the state are now able to serve cocktails made with the spirits they produce.

Ryan Vierheller of Blue Dyer Distilling Co. In Waldorf, Maryland is one of several members of the Maryland Distillers Guild who worked for three years to get the bill passed in July. The bill to allow Class 1 distillers in Maryland to serve cocktails won by a nose. “It passed not in the 11th hour but in the 11th hour and 59th minute,” he says.
The hang-up was language in the bill that allowed distillers to sell cocktails mixed with alcohol—provided at least 75 percent of the spirits were produced on site. Sen. Ron Young of Frederick objected to the use of any outside alcohol and the bill failed its first round. After the language allowing outside alcohol was removed, Young asked that the bill be given another shot. It passed.

The law went into effect on July 1, and Vierheller lost no time. “We had our permit on July 12—right behind the folks at Tenth Ward Distillery,” he says. The new law is good for job seekers as well as tipplers, he notes. “We immediately added a new position here and we plan on adding three to six more in the next few months.” And rather than limiting mixology options, he says, the last minute change to the bill presents an interesting challenge. “We have already begun experimenting with producing infusions, triple sec, and sweet and dry vermouth,” he says.

Visitors are now able to see how Blue Dyer’s signature spirits hold up in mixed drinks. “We don’t have to ask someone to imagine this delicious rum in a mojito,” Vierheller says. “We can show them firsthand how it tastes.”
For Tenth Ward Distilling Company in Frederick the law has inspired a new business model. Owner Monica Pearce says the new permit means the company can educate consumers about craft spirits and how to properly mix and enjoy its products. “We are calling it the Cocktail Lab,” Pearce says. Mixologists have come up with unconventional interpretations of classic cocktails. 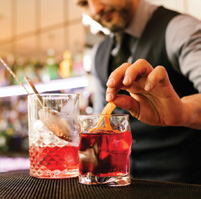 “Our slogan is ‘ward off ordinary’ so we have some wild and crazy, yet elevated drinks, that the average person has not seen before but could easily learn to make at home,” she says.

In anticipation of the legislation, Tenth Ward—which had already started to outgrow its production facility—renovated a large historic building in downtown Frederick. The new space means a larger staff and more income, Pearce says. “Before our tastings were $5 but now with a $9 cocktail on the menu and customers enjoying drinks with friends, our overall revenue has gone up.” The new format, she says, is a boon to tourism and the local economy.

Pearce says the space isn’t meant to be a bar. “We’re not open until 2 in the morning with a bouncer,” she laughs. Instead, she envisions an event space and a forum for educational workshops. Before the new law, most distillers had little choice but to offer tastings of their product straight up, Pearce says. Now, visitors can try the spirits in context. “We find that most people have one or two cocktails to experience and learn about our products,” she says.

Vierheller says the new legislation means Maryland can remain competitive with other states, including Washington, D.C., Virginia, and Pennsylvania.

And Pearce points out that it also means distilleries can compete “on the same playing field” with local wineries and breweries. “This was one of my biggest arguments for the change in legislation in the first place,” she says.

Lyon Distilling Co. In St. Michaels, is located just steps from a winery and a brewery. “When you go to a brewery you taste and then enjoy a pint or two. When you go to a winery you can taste and then have some glasses of wine,” says Jaime Windon, owner of Lyon and president of Maryland Distillers Guild. “At Lyon Distilling there is only sampling—there are no barstools at our bar.” Windon says this can be confusing for visitors. “We get tourists from neighboring states where tasting rooms have the flexibility to serve cocktails.”

Further confusing, Windon says, is the fact that the law requires passage in each county. “It’s not a sweeping law,” she points out. “Every county has to buy in and create a license.” So, consumers within Maryland may visit from a county where cocktails are permitted, expecting the same experience in another that has not adopted the legislation.
Nevertheless, Maryland distillery owners are well on their way to showcasing their goods in a way that guests can toast to.

Mike Cullison’s many years in the beverage industry have included gigs as beverage supervisor for a hotel, wine shop owner, salesman for a distributor, and manager of a local winery. He shares his passion for local craft beverages hosting the “Thirsty Maryland” podcast.