WHEN JAILBREAK STARTED ITS RESTAURANT, THE OWNERS SET A HIGH BAR 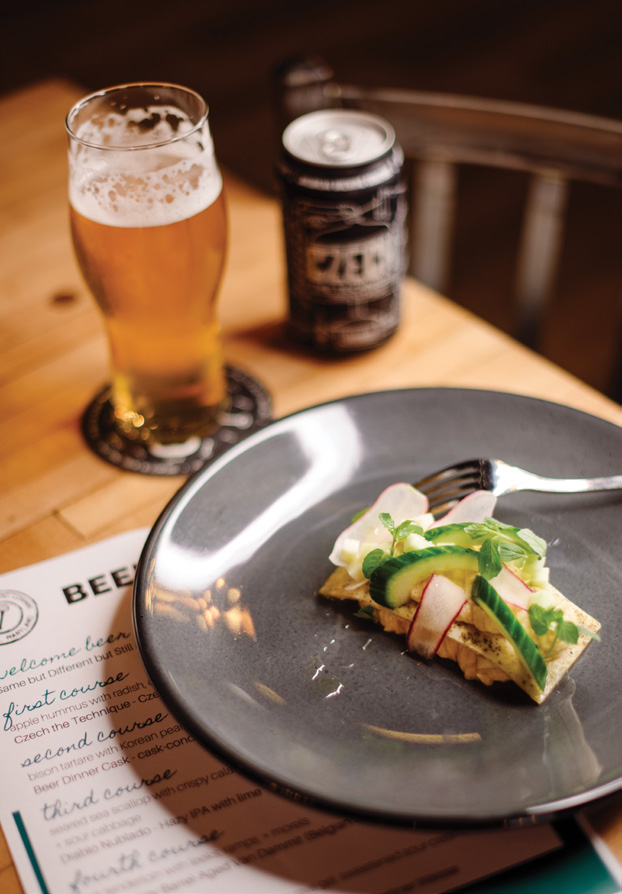 In years past, when the issue of legislative priorities came up at Maryland Brewer’s Association meetings, Justin Bonner routinely had a response. “We’d raise our hands and say, ‘We really need to increase the 500-barrel limit in the tap room,’” he recalls. But at the time he didn’t seem to have allies in the room. “We’d look around and it was like crickets.” (Never mind that within a few years, legislation was passed to up the limit to 2,000 barrels, and this summer it was raised to 5,000.)

In 2016, after just two years of operations, Bonner’s Laurel business, Jailbreak Brewing Company, was bumping up against the state’s restriction on annual taproom sales, he says. In other words, Jailbreak visitors were quaffing close to 15,500 gallons of beer each year. “We were thinking that, based on growth, we’d either have to close the taproom in, like, September and lay everyone off, or reduce the number of nights we were open during the week,” Bonner says.

Instead, Jailbreak changed its license. “We went from a full-on production brewery to basically a brew pub,” he explains.

The new designation doesn’t mean that Jailbreak is no longer producing full-on. As you enter the soaring, industrial-chic space, in a nondescript brick industrial park off Route 1 in Laurel, you have a full picture window view of the beer making operation beyond the tap room. There, brewmaster Clay Baines may be working on one of his specialty concoctions: a hazy IPA known as Special Lady Friend or Feed the Monkey, an orange Hefeweizen. (Yes, the beermakers love The Big Lebowski, the cult film that inspired these monikers; a painting of the three main characters—likenesses of Jeff Bridges, Steve Buscemi, and John Goodman—hangs in the tasting room.) Baines oversees the creation of more than 6,500 barrels (about 200,000 gallons) of upwards of 50 varieties annually.

As for the restaurant, says Bonner, it was meant to be a solution to a problem. “We looked at it as an unfortunate thing we had to do.”

Says Baines, “We had more trust in ourselves than in the legislature to solve the problem.” But now, they both agree. “It was the best decision we made,” says Baines.

“We actually got pretty excited about it,” says Bonner. “Of course,” he adds, “the story would be different if we didn’t have someone strong in the kitchen.”

A self-described foodie and lover of fine wine, Bonner had high standards when it came to hiring a chef. “We wanted everything to be fresh—we don’t even have a freezer here,” he says. “Basically, it’s elevated pub food.”

The menu, says Baines, is not pretentious. “What’s more approachable than a pretzel?” he asks. “But we hand roll them every day and let them rise for four hours. It’s that extra level of care, but it’s still a pretzel.”

A friend and restaurateur introduced Bonner to Alfredo Malinis, who had worked kitchens ranging from Baltimore’s Harbor Court to the Maryland governor’s mansion, from North Carolina to Connecticut. He had been opening chef at Level in Annapolis, at the time an innovative spot that specialized in creative small plates and cocktails made from locally sourced ingredients.

At Jailbreak, says Malinis, “We make craft food just like the brewery makes craft beer.” Moreover, he adds, “The menu is concise on purpose. It’s small and focused rather than trying to appeal to everyone.” What they don’t have? A kids’ menu. “We don’t admonish people for coming in with children as long as they’re well behaved,” he says, referring, we assume, to the children. What they do have: flat breads, a wagyu burger, tacos stuffed with Korean beef or shrimp curry, and mac n’ cheese (presumably for big kids).

“When we rolled out the food we got a little bit of pushback,” says Bonner. People weren’t used to $15 burgers—even those made from fancy Japanese beef. But the food is there to sell beer, and Bonner admits, “We have higher food costs than probably most would consider reasonable.” 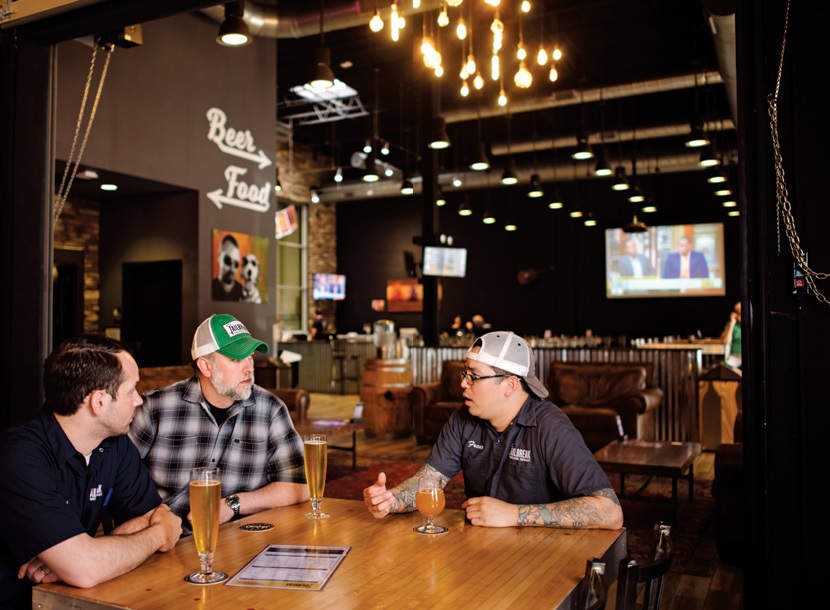 Each menu item has a suggested beer pairing. Like Special Lady Friend, a not-too-hoppy IPA, alongside the jerk chicken flat bread with grilled pineapple and cilantro mayonnaise, Baines’ favorite. “Yes, pineapple belongs on pizza,” he insists. 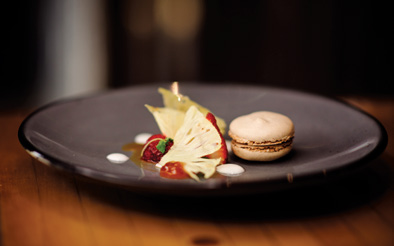 Pineapple apparently also belongs in beer. Another recent offering on tap was the PC Funk, a Berliner Weisse, or sour beer, brewed with toasted coconut and pineapple puree. It is not to be mistaken for a flavored beer, Baines points out. Actual shredded coconut—400 pounds in all—was stuffed into muslin bags and lowered into the vats of beer to steep like tea. The fresh pineapple was added later. “You can buy toasted coconut flavoring,” he says. “But we stick to using real things.” 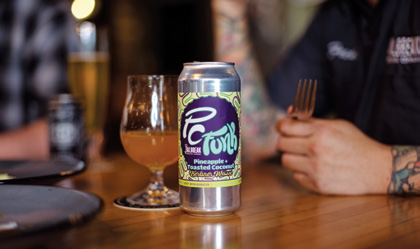 PC Funk, the toasted coconut Berliner Weisse, was paired with the dessert of crispy pineapple with guava gel.

The PC Funk was featured at a recent beer dinner, Jailbreak’s nod to cuisine more elevated than artisanal pretzels. The brew was paired with the dessert, a fruit plate with crispy pineapple, pickled strawberry, and guava macarons. The ticketed dinners, held occasionally throughout the year, are a chance for Malinis to exercise his fine dining muscle and for Baines to show off the fulsome flavors of his brews.

At the inaugural dinner, held in January, the first course was squash soup, served in a hollowed-out gourd and topped with a hunk of foie gras. The accompanying beer was a special cask with a hint of cinnamon and orange. Indeed, the sharp citrus was a nice contrast to the buttery liver. This was after the welcome drink, a pink-hued cranberry sour beer with the aroma of spruce.

“I’ve always paired wine with food, so the beer thing is interesting,” says Bonner. “You can do so much more with beer because there’s so much variety of flavors. The spectrum is huge.”