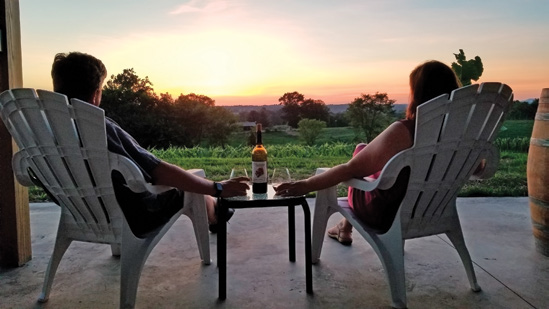 When Robert Butz and his wife Cathy began to look into growing grapes about 10 years ago, the idea was simply to add another crop to the family farm. Butz and his three brothers raise corn, soybeans, wheat, and hay on some 1,200 acres in Montgomery and Frederick counties for the family’s second-generation Windridge Farm.

“I was looking for another agronomic challenge,” Butz says. “We wanted to diversify the farm.”

But grapes made sense on another level. “We’re a wine drinking family,” says Butz. His uncle, Rob Truland (whom he’s named after), now a partner in the venture, had a taste for fine Bordeaux, Butz says.

The couple planted about nine acres in Darnestown near their home in Montgomery County; the first planting included chardonnay, cabernet franc, cabernet sauvignon, merlot, petit verdot, and a hybrid chardonnay (seyval crossed with chardonnay) developed by Cornell University called chardonel. After a few years of selling grapes to wineries the Butzes got the itch to try their hand at vinification—or fermenting and bottling it themselves.

They hired a winemaker, Nick Maliska, the former vineyard manager for the Vineyards at Dodon, installed winemaking equipment in a Frederick warehouse, and produced just shy of 2,000 cases in 2017 and slightly more in 2018. Butz is pleased with the results, crediting the 10-year-old vines. “Although we’re a new winery, the vineyard is coming into its prime right now,” he says.

In July, Windridge Vineyards opened a temporary tasting room in Darnestown—consisting of an open-air pavilion set atop a hill overlooking neat rows of vines and rolling countryside beyond—operating it into the fall. They’ve begun construction on a new facility at the Darnestown vineyard, with plans to move the winemaking operation from Frederick.

The new building will be ready by late spring of 2020, Butz says. In addition to an 1,800-square-foot tasting room, there will be seating for about 65 along with a sampling bar and an outdoor patio.

Windridge wines are priced in the $30 range, with the limited edition cabernet franc and the Seneca red blend the most popular reds, Butz says. He has high expectations for the newly released Encampment, a blend of cabernets sauvignon and franc, and he’s most excited about the sparkling wine currently aging in bottles. “We’re doing a traditional method sparkling wine, like Champagne,” he says. “It’s a huge commitment of time, but we made every decision along the way to make the best wine we could.” –M.T.