FROM IRON CURTAIN TO Gold Medal 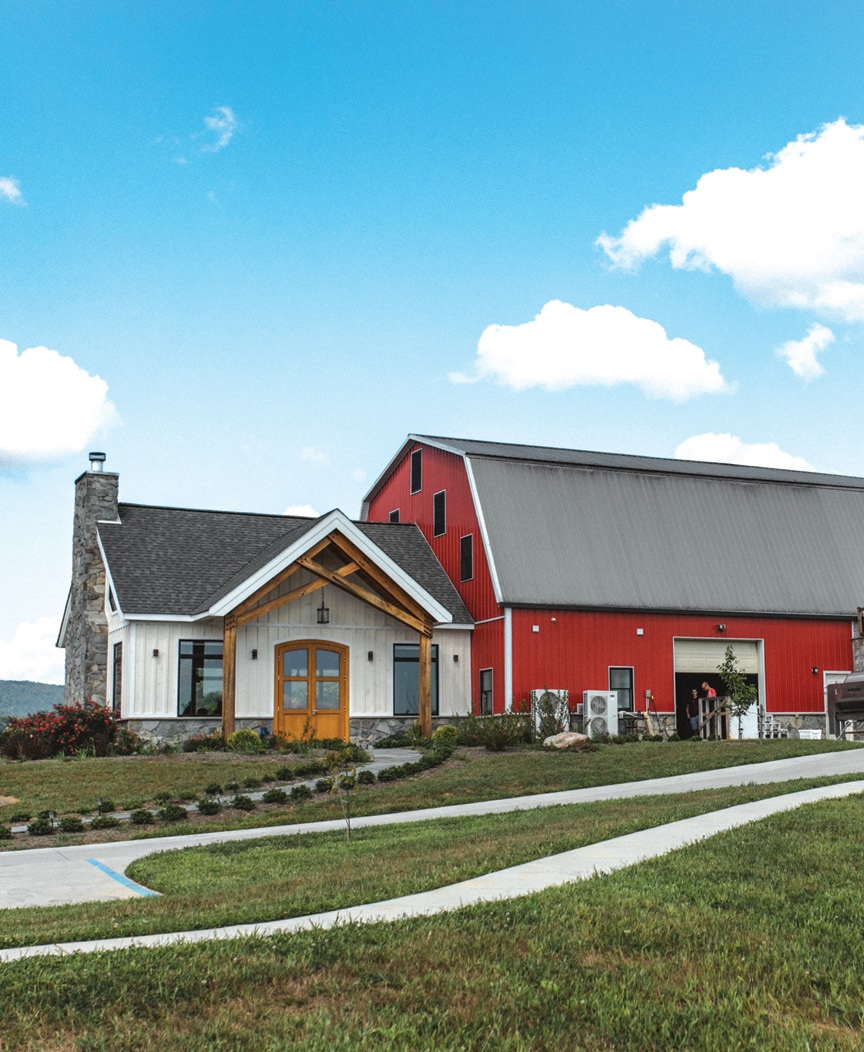 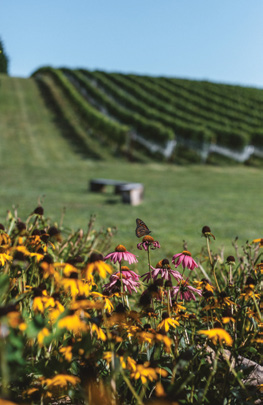 The grape, says Voytek Fizyta, “provides softness, with layers of fruit and silk.” Fizyta, the proprietor of Catoctin Breeze Vineyard, should know.

“The grape is grown successfully in California and France,” says Fizyta, “and somehow our site in Maryland has proven well suited for it, too.”

The hilly vineyard, at the foothills of the Catoctin Mountains (and on the Frederick Wine Trail), seems to provide a perfect storm for winemaking. With its own microclimate, the site has proven to be hospitable for growing grapes, an especially finicky crop. For one thing, grapes don’t like humidity—posing a challenge in these parts. But the Catoctin site has a constant breeze, which keeps the plants dry. (And because that nice, drying breeze keeps mold at bay, less fungicide is required.) The region is known for its silty, alluvial soil, and the soil here seems to strike the right balance—feeding the vines, but not too rich in organic matter. Too many nutrients can result in over-vigorous vines, detracting from flavor.

“A little stress is a good thing for grapes,” says Fizyta.

The combination of breeze, sun exposure, drainage, and soil give the vineyard its special terroir, or character. And all these grapes are turned into gold medal-winning wines by winemaker Mike Lentini.

Catoctin Breeze is 13 years in the making, a work in progress by Fizyta and his wife Alicja, who left Poland as political refugees 38 years ago. Now their handful of employees—including two of their sons—tend the land and grow the grapes, handle marketing and logistics, and of course, make wine. Lentini is dedicated to continually learning more about the art of winemaking.

In 1980s Poland, life was grim, says Fitzya. “We were in a sort of prison. There were shortages of food, many restrictions. We waited in line for hours to buy basics like bread, milk, eggs.” With the Solidarity movement and lifting of travel restrictions, the Fitzyas (and their two children at the time) were able to secure visas. “We had no idea where to go,” he says. “We just wanted freedom.”

With the help of a Catholic relief organization, they eventually found themselves outside of Detroit, Michigan, and Voytek found work in his field at Chrysler. Alicja, a physician, put her career aside to raise the children. Eventually Voytek transitioned to a career as a manufacturing representative for automotive components, and after the Iron Curtain fell in 1989, he began traveling to Europe to do business with Polish companies. “There was finally economic freedom,” he says.

The Fizytas, now with four children, moved to Montgomery County in 1994 so Voytek could travel more easily, he says.

The couple immersed themselves in wine culture. With friends, they created informal wine clubs, which met once a month. Along with enjoying wine, the meetups centered around different themes. “Chardonnay one month. Wines from Spain. Wines from Bordeaux,” says Fizyta.

They even named their dog, a German short-haired pointer, Vini.

In 2005, with their children grown, the Fizytas were on a tour of a Virginia vineyard with friends when inspiration struck. “My wife and I looked at each other, and we said, ‘This is a pretty good idea,’” recalls Fizyta. “We thought, ‘We can do this in Maryland.’”

They bought the Thurmont property in 2006. The place was run-down, with fields overgrown with Canadian thistle and other weeds; they think there may have once been an orchard. For four years the couple worked with a local farmer to bring the soil back to life by planting corn, winter wheat, and soy.

In 2010, they put in their first blocks of grapes—cabernet franc and syrah on the south slope, and white grapes for chardonnay and viognier on the east. They began working with an architect on a wine production facility, barn, and cellar. They brought in a vineyard consultant and joined as many associations as they could to learn more about the business.

Winemaker Lentini says that he and Fizyta are in sync about their production philosophy. “We’re geared toward small quantity, high quality,” he says.

But Lentini doesn’t content himself with making wine only from the varieties grown on-site. Using grapes purchased from other vineyards—often in Maryland—he makes a prize-winning barbera, along with merlot, rosé, and a vidal blanc, among others.

Recently, Catoctin Breeze expanded the cabernet franc vines, adding close to 400 plants, and also added albariño, a variety typically grown in Portugal and Spain. If all goes well, Lentini says he’ll bottle the albariño in a couple of years.

In addition to Lentini, the operation has three employees who work full time in the vineyard and cellar, a tasting room manager and a marketing person. Fizyta’s two sons also work for the winery. Tommy, serving as general manager, takes care of the business, prepares for events, helps out in the vineyard, and even makes furniture. Tommy’s older brother Adam helps with marketing and promotions and manages club memberships, among other tasks. 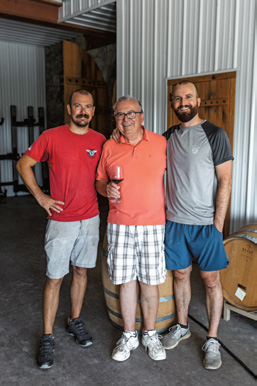 Lentini, who works in the vineyard during the spring and summer, moves to winemaking duties in the cellar when the grapes are not growing. There’s the crushing of the grapes, overseeing fermentation, and transferring the wine to oak barrels for aging. Each step involves minute decisions essential to the success of the final product. 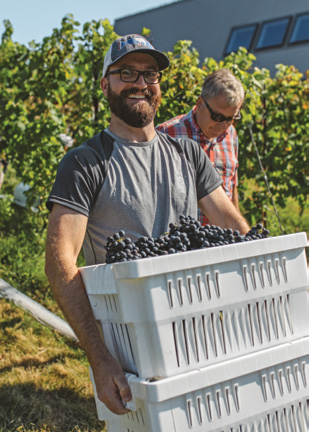 On Friday nights, the winery opens itself to the public with food trucks and live music, and special events fill many of the weekends. While the butterflies (notably the tiger swallowtail that graces the label of Catoctin’s estate-grown cabernet franc) and skippers help themselves to the farm’s spicebush and echinacea, guests are able to sit back, relax, and enjoy the setting with a view of the Catoctins just beyond the farm. 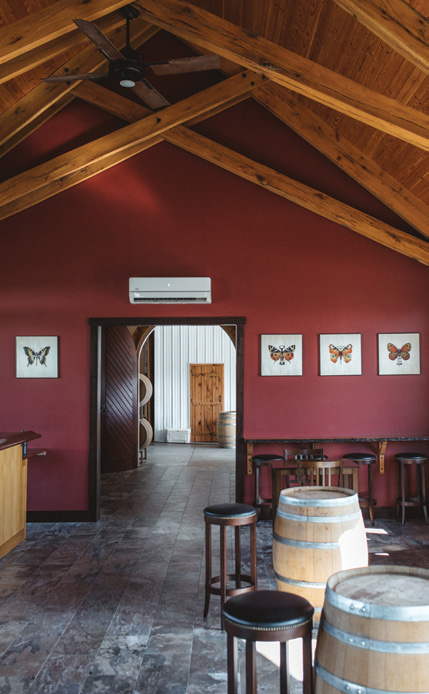 Inside the Catoctin Breeze tasting room.

Over the years, Fizyta has become a little less active in the vineyard, although he still frequently walks the rows and meets daily with his staff. He and Alicja have been spending more time with club members and guests on the weekends. 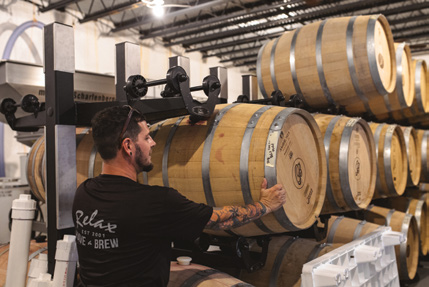 Mike Lentini, the winemaker, preps the barrels for fermentation.

“We have a great, great time,” Fizyta says. “One of the unexpected benefits of this business is that we get to meet interesting people all the time. And I guess they enjoy meeting us.”

What Can You Do at Catoctin Breeze Vineyard? 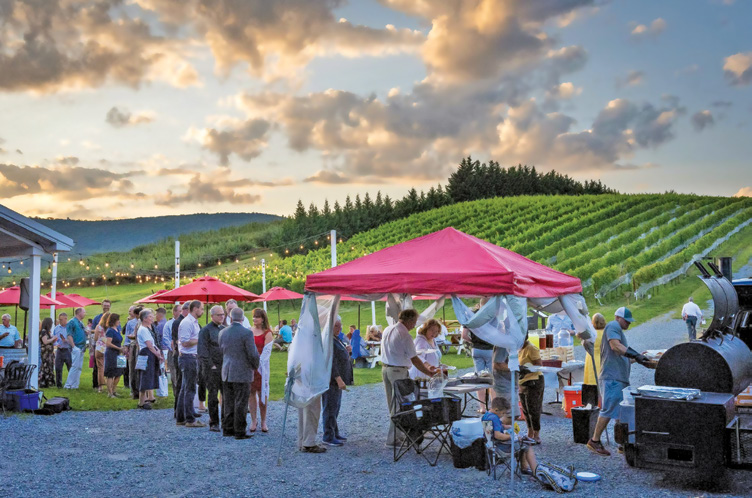 Last summer the winery hosted goat yoga sessions—an hour of yoga with goats that included a wine tasting or glass of wine. In July they hosted a Wine & Wheels Car Show with live music, a pizza truck, auction, and raffle, with all proceeds going toward a nonprofit organization benefiting children recovering from cancer. In the fall, around Halloween, the Fizytas host a Civil War ghost stories event around their firepit. 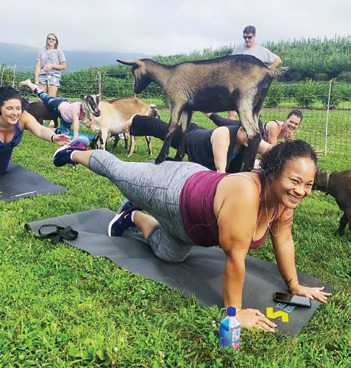 Other fundraising events include an art auction, Beauty and BBQ, which raises money for St. Anthony’s in Emmitsburg, and an event to benefit a rescue operation that works with German short-haired pointers, called “Wine for Vini,” after the dog they recently lost. 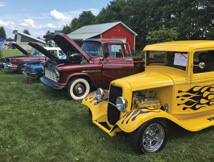 In addition to basic tastings, visitors can take a tour, enjoy a vertical tasting (multiple vintages of the same wine), a blind tasting, or take part in a blending event.

“The customers get an educational experience. We take them behind the scenes, and it’s an opportunity to learn,” Fizyta says.

One of the Fizytas’ favorite times of year is harvest, around the end of August. They invite volunteers—both club members and newbies—to spend the morning picking grapes. Alicja then prepares a big lunch—perhaps short ribs or pasta, with salad and dessert. “We sit together and share good food, wine, friendship,” says Fizyta, beaming. “People love it.”