Still a work in progress, the gin-centric Dutch Courage, from Eric Fooy and Brendan Dorr (above l-r), will soon open in Baltimore’s Goucher neighborhood. (photo by Brennen Jensen)

Let the adventure be-Gin! That’s the playful way veteran bartender Brendan Dorr likes to describe his new venture: the gin-focused cocktail bar Dutch Courage debuting soon in Baltimore’s Old Goucher neighborhood. He and his partner Eric Fooy have been shaking and stirring behind bars together for some 15 years, most of that time at the B&O American Brasserie. They’ve been endeavoring to open the city’s first gin joint for over two years now and this autumn the martinis, rickeys, and Negronis should finallystart flowing. (City Hall red tape is always a challenge and the ransomware attack didn’t help.)

Why gin? “It’s a classic cocktail ingredient,” says Dorr, who is also president of the Baltimore Bartender’s Guild and runs a cocktail consulting business. “You look at old cocktail books and it’s not vodka or even bourbon you see—it’s gin, rye, and fruit brandy. And I’ve always enjoyed gin personally. We also wanted something different. It gives us a niche while allowing us to still be what we want to be: a cocktail bar.”

“A happy cocktail bar–good gin, good music, and good vibes,” Fooy chimes in. “See all these windows? The space is bright and airy. The opposite of what’s mainstream in many bars now with dim lighting.”

The space is cluttered and dusty at the moment. A work in progress. But the windows he alludes to loom large in a whitewashed front room with curvilinear walls. The operation rambles through the first floor of an 1880s rowhouse with a grand, turreted front. The elegant Victorian was once home to the president of Goucher College (back before the neighborhood’s namesake school moved to Towson in the 1950s). “We do know that one of the ladies of the house back then was an avid gardener and had Eleanor Roosevelt over for dinner,” Dorr says. “We’ve already talked about doing a cocktail called The Eleanor.”

Even in its construction-zone state, it’s easy to see the building’s great bones, such as the oak wainscoting, now denuded of umpteen layers of paint. The large middle room is dominated by a long bar with room for 18 stools. Dorr salvaged a lot of old wood during interior demo work and used it to make the bar face and tabletops supported by antique sewing machine bases. (He describes Dutch Courage’s overall aesthetic as “eclectic.”) There’s no longer a garden out back, but a crenulated stone wall frames a pleasant patio space facing out on some former Goucher College buildings. A tucked-away kitchenette will offer up small plates and snacks.

Shelving behind the bar will house 100 or more gins, Maryland’s award-winning craft versions among them. “I like the Baltimore Spirit Company’s Shot Tower Gin,” Dorr says. “And McClintock Distilling’s gins, Forager and Gardener, are also very good.”

Gin is jumping these days. Juniper is its foundational flavor, but craft-distilling and the cocktail revival have seen gin types and tastes expand–or even get reborn. The spirit’s malty Dutch ancestor Genever is back on bar rails, as is the older, sweeter type known as Old Tom. The crisp, juniper-forward London Dry style still dominates—your Beefeaters, Bombays, Tanquerays, and the rest. Craft makers, however, often dial back the “piney” taste in favor of citrus or floral flavors. There are also golden-hued, barrel-rested gins exposed to wood, gins you can sip like Scotch. 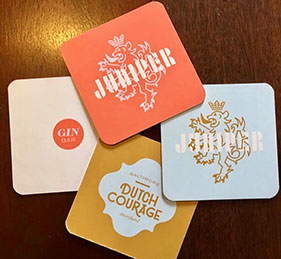 So, if you think you don’t like gin—the historic spirit dubbed “mother’s ruin” back in Britain’s boozy 18thcentury–maybe Dorr and Fooy can find a type to tempt you. And if you reallydon’t like gin, fear not. Dutch Courage is gin-centric, not gin-exclusive. Plenty of other spirits will be on hand, along with beer, wine, and mocktails.