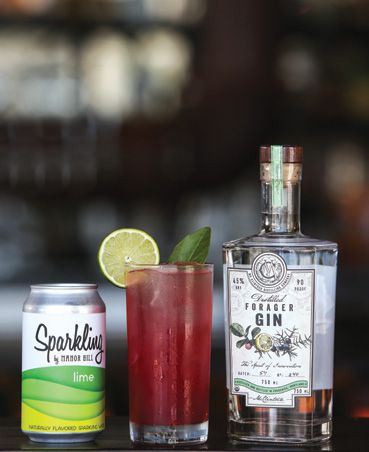 Since its founding in 2015, Manor Hill Brewing has wowed Marylanders with its beers, made on Manor Hill Farm in Ellicott City. Now, the family-owned brewery is giving locals something else to cheer about: flavored sparkling water.

In the case of Manor Hill’s canned sparkling waters, currently available in tangerine and lime flavors, necessity was the mother of invention.

“Our ethos is sourcing as many products as locally as possible,” explains Director of Operations Jason Gotcher. “That can be challenging, if there aren’t many options.”

One product that wasn’t readily available was locally sourced sparkling water. So the Manor Hill team figured out how to make it on their own, using water from a well on its farm in Ellicott City.

“We dug a well and ran numerous tests on the water,” says Gotcher. When it passed muster, he says, production began. The water is purified and then flavored with natural flavorings.

Sparkling water is a hot product these days; from June 2017 to June 2018, $2.7 billion worth of nonalcoholic sparkling water was sold in the U.S. But here in Maryland, little of that water comes from local springs. Manor Hill aims to change that.

“La Croix, Bubbly—most people have no idea where that water is coming from,” says Gotcher. “We’re making sure that people who want to enjoy sparkling water know what they’re getting. It’s Maryland’s option.”

Gotcher prefers Manor Hill’s final product to other flavored sparkling waters both in terms of local sourcing and for its flavor. “It’s fruit-forward on the nose and ends up being very refreshing,” he says.

Though right now, only two flavors are available, Manor Hill has plans for more. “We didn’t want to grow too fast—we want to do it right,” Gotcher says. “But we envision other flavors down the road. There’s potential for an (unflavored) original as well.”

Manor Hill sparkling waters are currently available at the company’s restaurants, Manor Hill Tavern, Victoria Gastro Pub and Food Plenty, both on their own and as an ingredient in cocktails, like the bright, appealing Blackberry Collins (recipe left).

It is also available at some local stores where Manor Hill Brewing beers are sold and the company hopes to distribute it more widely soon—so Marylanders can hydrate with something truly local. –Kit Waskom Pollard

(from the cocktail menu at Food Plenty)

Mix gin, Cointreau, lemon juice and blackberry syrup and top with sparkling water. Garnish with a wheel of lime.