WHITE TIGER TAKES DRINKERS ON A TRIP TO LAOS

Itsara Ounnarath’s journey into the world of craft distilling began five years ago when he opened White Tiger distilling in Stevensville on the Eastern Shore. In the summer of 2018, his operation itself took a journey when he moved it—still, stock and barrels—to a new home in Bel Air. 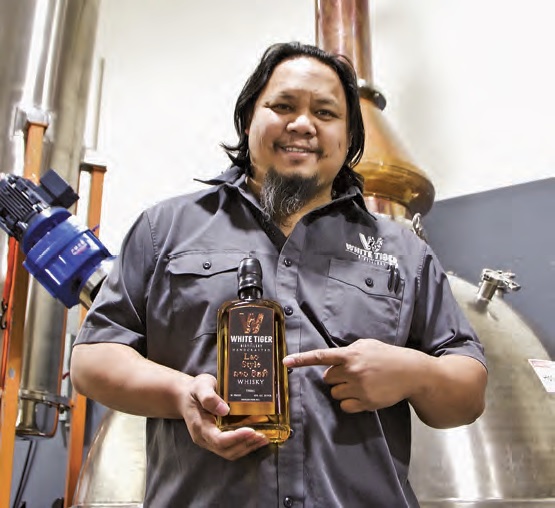 Itsara Ounnarath’s journey brought him to Stevensville, where he makes Lao-style spirits.

But none of this compares to Ounnarath’s globe-trotting personal journey as a refugee from war-torn Laos in the 1980s. After stops in camps in Thailand and the Philippines, he was about 5 years old when a church in Abilene, Texas, helped his large family—nine siblings—settle in the United States. He went on to have a distinguished 20-year career in the U.S. Army: three combat tours in Iraq, a bronze star and a rise from grunt infantryman to college-grad captain performing medical research.

“Looking back on my life, everything I’ve done has been preparing for this moment in my career,” says Ounnarath, now a full-time civilian and full-time spirits maker. As he sees it, he learned to drink as a soldier; learned much of the chemical and technical skills he needs as a distiller working as a medical lab scientist; and expresses his Laotian roots in his signature product: Lao Style Whisky. 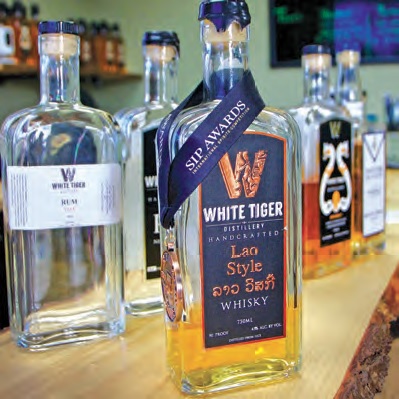 For those unfamiliar with Lao spirits, Ounnarath’s potent beverage is made from a Laotian staple, sticky rice. He got the idea to go into distilling from a TV show about moonshiners and thought a Laotian spirit would distinguish him from others jumping into craft distilling. Only his early efforts were undrinkable. Then his mom paid a visit from Texas.

“She walked me through it,” Ounnarath says. “She didn’t have anything written down—it was all in her head—but I followed her instructions and it worked.” He learned that his mother and her relatives had made moonshine in Laos for years. “I never knew,” he marvels.

The spirit is called Lao Lao back home but Ounnarath thought calling his version ‘whisky’ (yes, the Scots spelling, with no “e”) would be an easier sell on these shores. He barrel-ages it for a bit to meet the labeling requirements for whiskey. It picks up some color from the wood but remains a sweet and smooth sipper, despite its 120-proof punch.

White Tiger makes other spirits, including rye whiskey, blended whiskey and brandy, but its Lao Style Whisky is the flagship, bringing home a bronze medal from the 2017 Spirit International Prestige (SIP) awards. “It’s been verified and approved by the elders in the Laotian community,” Ounnarath says of his South-Asian inspired sipper. “Even the Laotian royal princess came here a few days ago.”