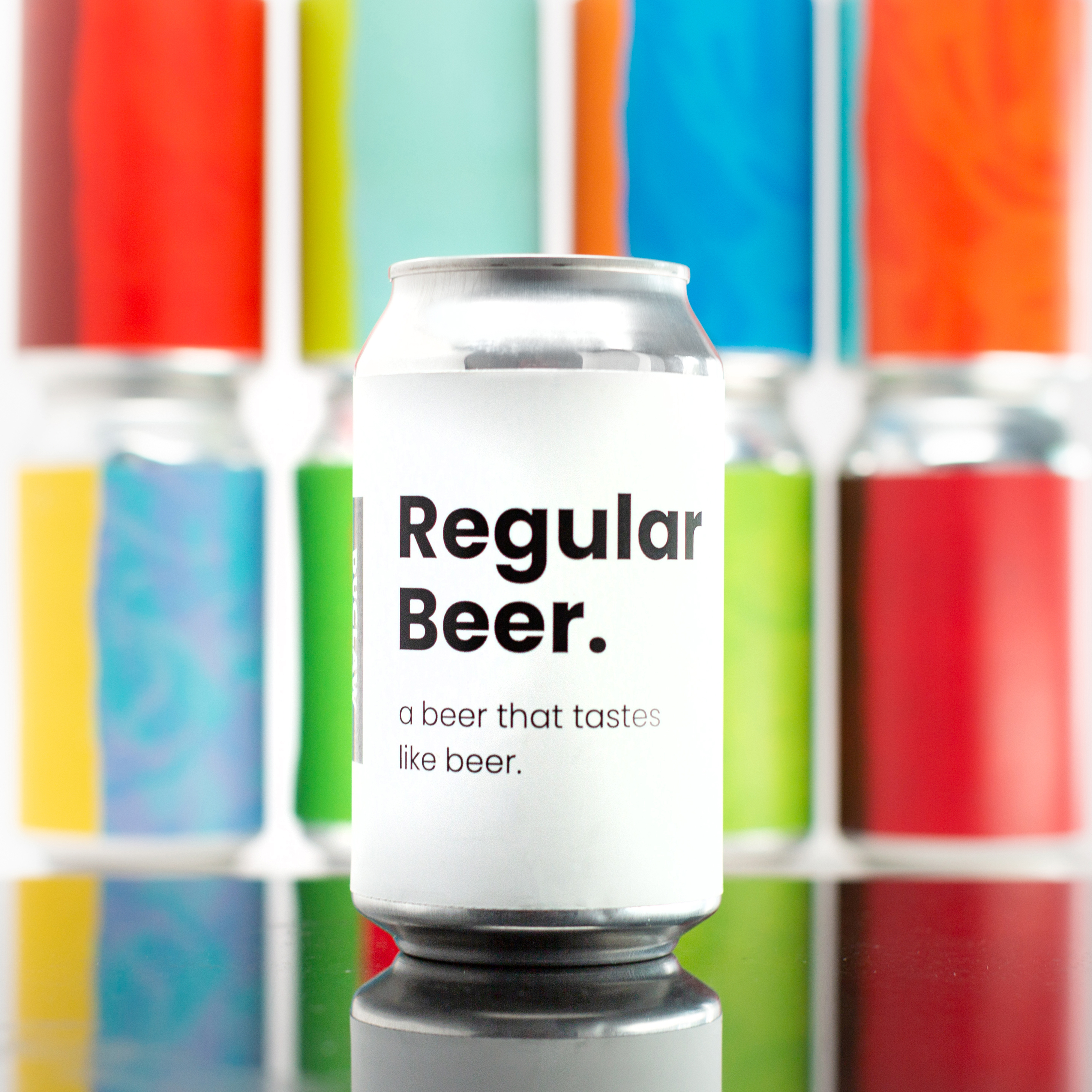 I don’t know which caught my eye first: The basic black-and-white can or the words Regular Beer. But during a round of time-killing web surfing I discovered that the latest local brew seems to be giving a one-finger salute to the craft scene. Yep, there is a craft beer called Regular Beer. To proudly tout a plain Jane lager–replete with the tag line, “A beer that tastes like beer”–is essentially trolling a beer world where products such as Sweet Baby Jesus Chocolate Peanut Butter Porter and the fruit-cereal flavored (and glitter containing) Unicorn Farts sour ale proliferate. But, wait, I also soon realized that Regular Beer is made by DuClaw Brewing, the very folks that, uh, just happen to make Sweet Baby Jesus and Unicorn Farts. Is the Baltimore brewer trolling itself?

“One of our sales guys came up with the idea because he had heard so much feedback from retailers and consumers asking if we had any regular beer,” DuClaw’s marketing director Madeline Caldwell told me. “We tend to be focused on what’s the new ingredient and what are the new styles and trends and all that. And, so, we came up with an idea to just make a regular lager and call it regular beer.”

You can’t fault the logic. In world that’s increasingly full of unicorns a horse is exotic and cool. “For a while it just got crazy,” Caldwell says of craft brewing. “It is crazy. And that’s part of the fun. But there is this subset of beer drinkers who like beer but don’t love all the crazy. So, this is a way to invite them in. I like the idea of making craft open to people and accessible.”

Count me in. I’m one of those beer drinkers that tends towards the old-school side of the bar rail. (That’s also another way of saying I often feel old in taprooms full of chattering millennials.) I do try some of the “crazy” beers and even like some. (Waverly Brewing recently had a sour aged in a mezcal barrel that was tasty, tart, and smoky.) But, by and large, I seek out traditional styles with reasonable ABVs and leave the fruit-flavored or doubled or glitter-bombed brews to others. I come by this naturally. I’ve been drinking local craft beer since it was called microbrewing and Baltimore had two places to try it, the long-gone Baltimore Brewing Company (DeGroen’s Marzen was the bomb) and Sisson’s (the Fed Hill brewpub is no more but founder Hugh Sisson is going strong at the helm of Heavy Seas). Today’s whippersnappers don’t know what it was like just weaning beer drinkers away from Bud and Lite. (Oh, and I used to walk five miles to the brewpub in the snow! Get off my lawn!) 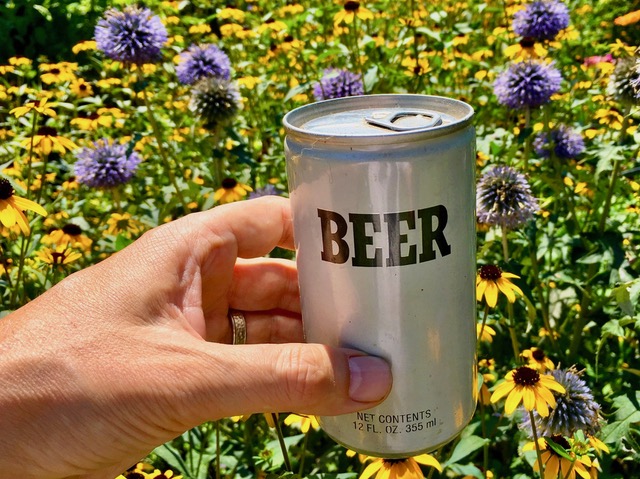 Anyway, this simplicity-is-a-strength trend is one I can get behind. But is it a trend? Caldwell feels it might be. And Craftbeer.com had this to say: “Beer tasted like beer long before it tasted like a pastry, a latte, or a milkshake, and a new movement of crushable lagers is sweeping through the craft beer world, making beers that taste like beer cool again.” Last fall I discovered there’s a whole world where Beer Tastes Like Beer and it’s called Germany.

I haven’t gotten my hands or lips on a can of Regular Beer yet, but the 4.9 ABV lager should soon be in wide release. The simple cans should stand out amid the razzle-dazzle colors of the other canned goods. And that’s by design as well, Caldwell said. She was not sure if the Regular Beer graphics were inspired by the generic canned beers from back in the day. My frugal dad drank generic canned Beer back in the 1970s and I keep a can of it on display in our kitchen where it reminds me of my old man. It’s pictured here in its monochrome glory amid our garden. 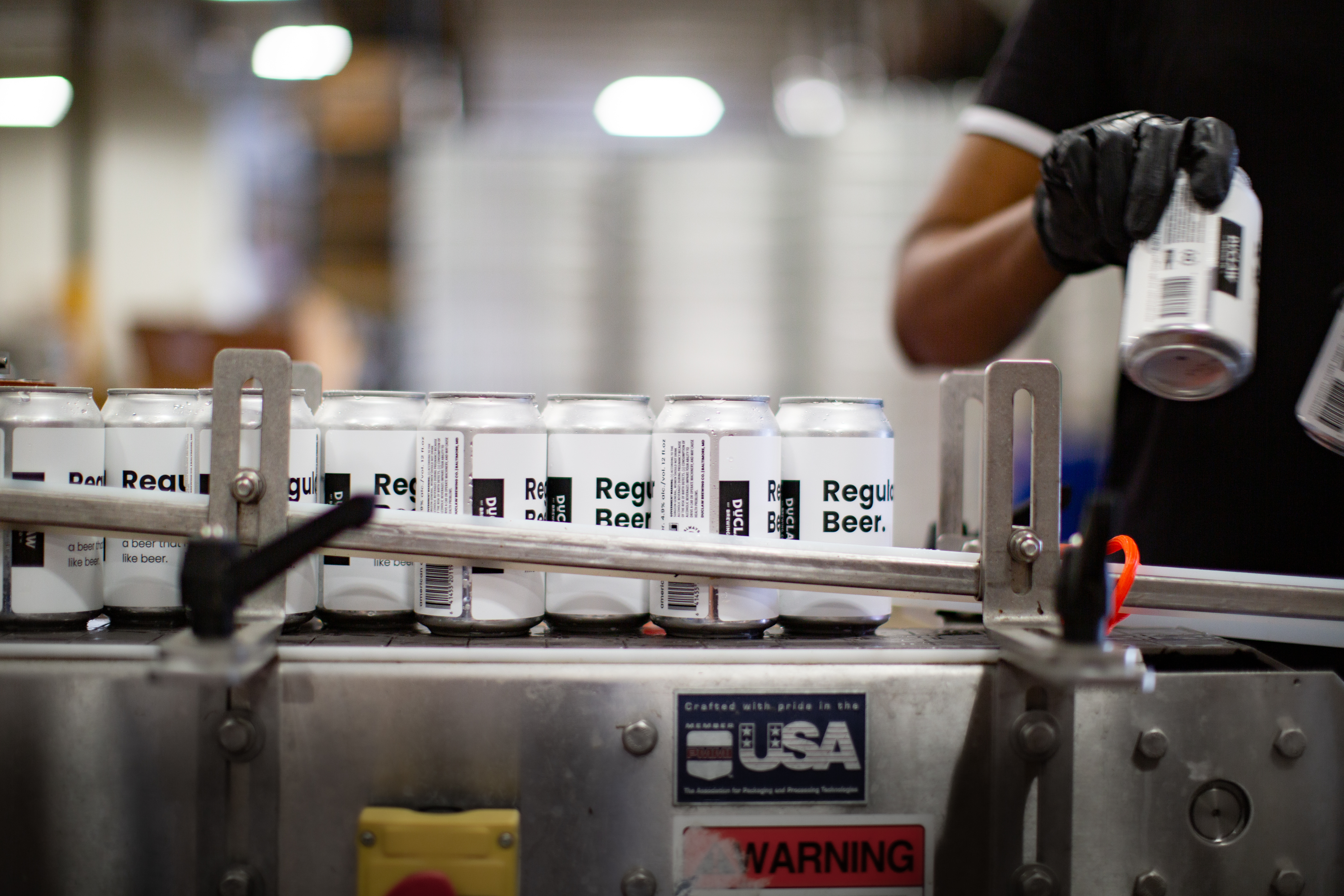