Meandering Among the Hampden Brews

Mixolo is a Baltimore-born going-out app for those who want to step out on their own.

There’s a well-worn path connecting Omnibibulous HQ with Waverly Brewing and Union Craft Brewing. One of the best benefits of life in Woodberry is the eazy-peazy access to these two fine breweries. Still, when I was approached by Mixolo, a solo-friendly social network, about leading a beer walk between these two, as well as relative newcomer, Nepenthe, I was a bit surprised. And then delighted.

The 20 or so of us Beer Walkers gathered at Waverly, though our first drinking stop was up the hill at Nepenthe (where parking was a premium because of Hon Fest.) I welcomed folks with some ice-breaker questions: When did it become legal to make homebrew in this country after Prohibition? Which president signed the law to allow us to make beer without a license? A gentleman got it right. Jimmy Carter signed the law in 1978 and it took effect in’79. A lot of things had to happen before craft brewing–or, what we once called microbrewing–could take off and gave us the bounty of good beer we have today. I posit that the homebrew law was a biggie, as it sent brew-curious folks to their garages and basements with kettles and carboys. Then (as now) many ended up opening breweries. 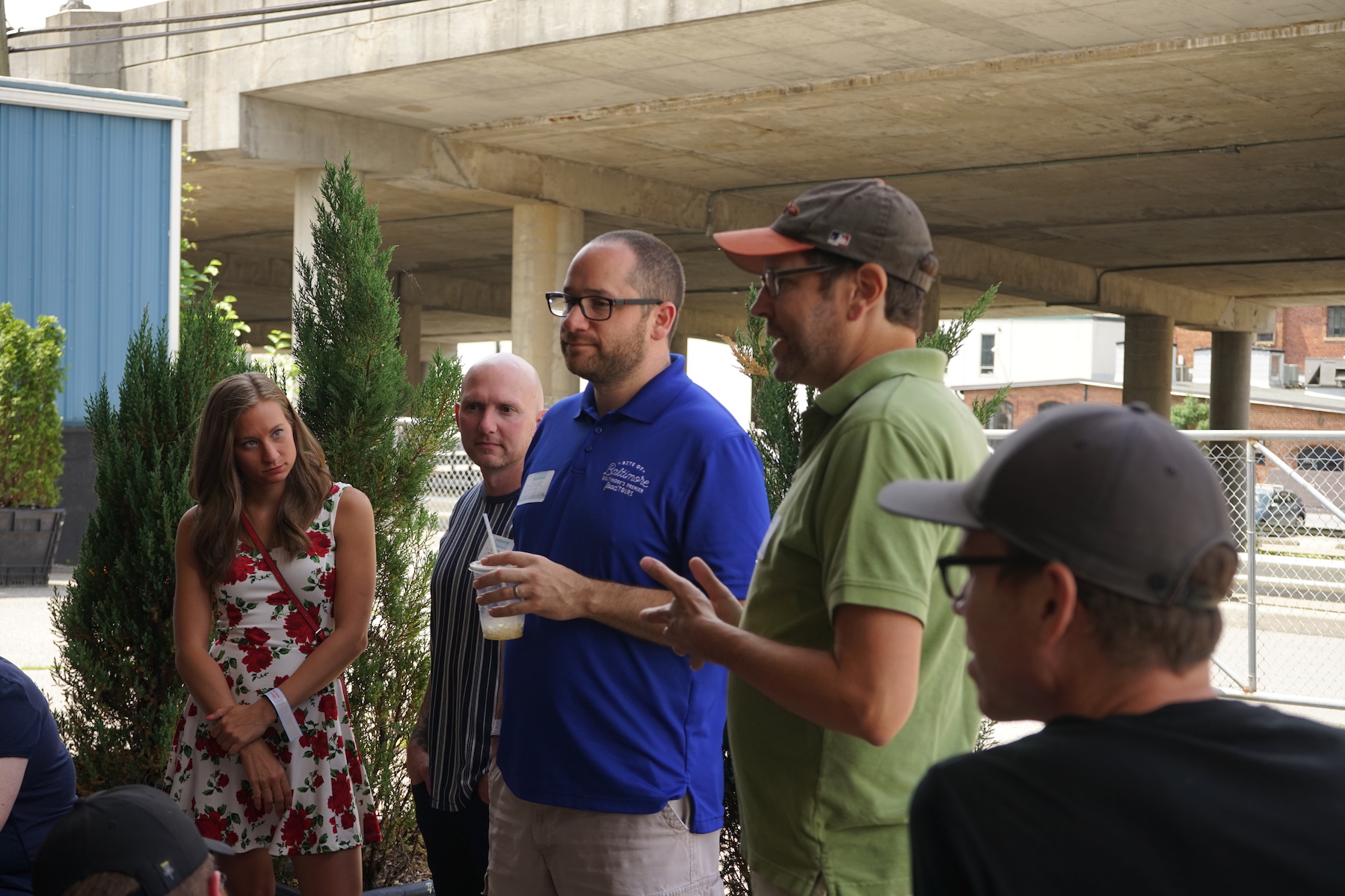 Brennen Jensen (aka Omnibibulous, right, in green shirt) introduces the brew tour with a short quiz.

A follow-up question: What year did it become legal to make distilled spirits in your house without a license? The same gent ponied up correctly again. Trick question—concocting homemade booze is still a felony. I did a little more such spiel, such as explaining how it wasn’t until 1989 that microbrewing arrived in Baltimore. But it soon became clear as I stared out at the array thirsty faces. To borrow some immortal words from Spinal Tap’s Marty DeBergi: Hey, enough of my yakkin’ Let’s boogie. 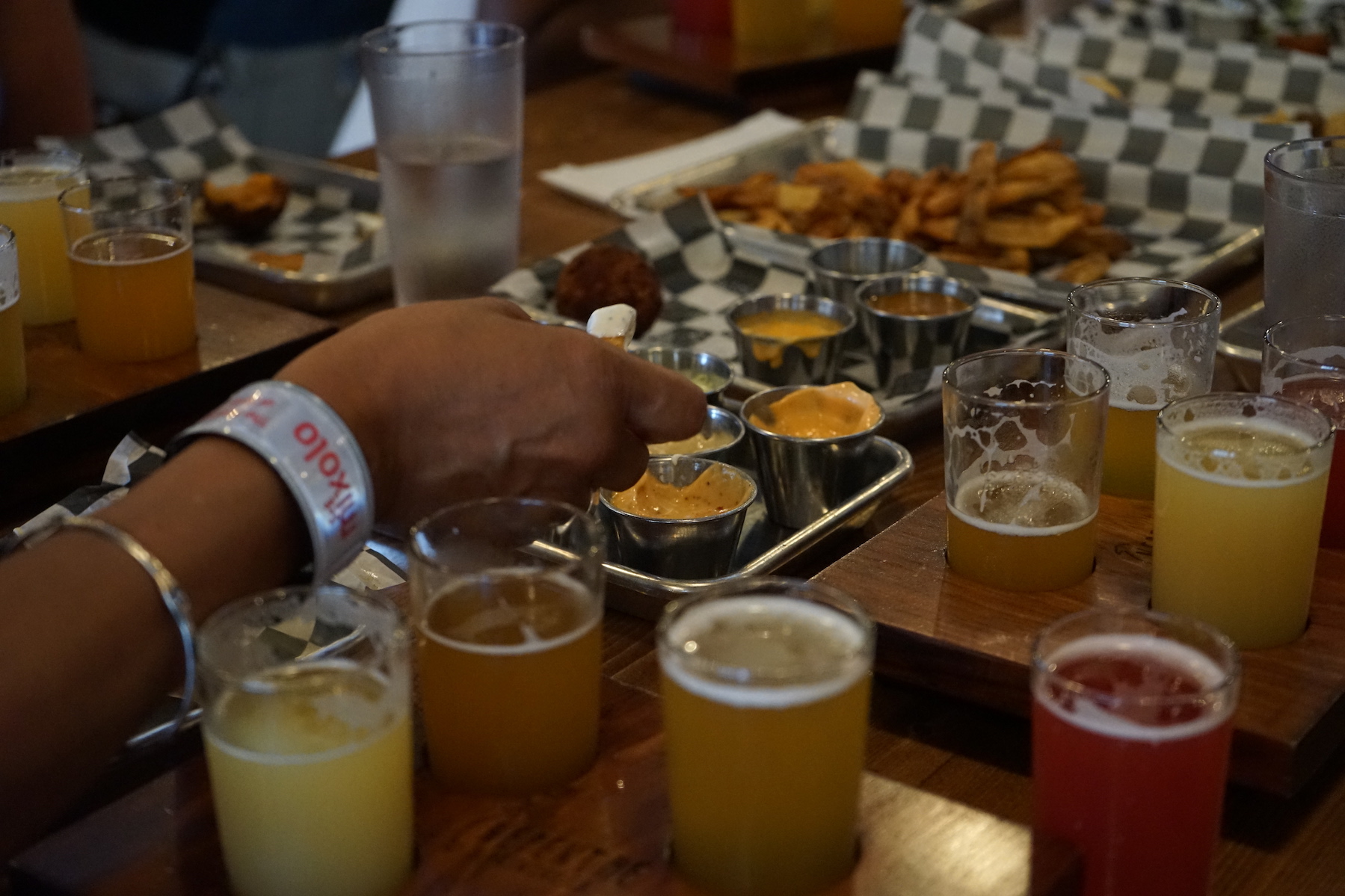 Nibbles and flights at Nepenthe.

At Nepenthe we had nibbles along with our flights—the chicken wings stand out—and toured the brewery where we saw the huge tubs of marshmallow crème they use for a beer. (And I bit my tongue and remained silent–not being a fan of such dessert beers). Everyone wore names tags that listed their favorite beer. There was many IPA people, of course, also pale ale, stout, and someone who wrote Blue Moon. I was the only one with ESB (extra special bitter). There was also a couple from NC who were moving up this way (and I did my best to tell them that there’s much more to Baltimore than the sad headlines). Some wine folks were walking on the beer side as well.

Union Collective is a short hop from Hampden proper.

It was easier walking down the hill to Union but I really think the brewery should install a slide to get down that huge sloping lawn. (I’m told, however, that they are looking at turning it into a meadow of native plants; I approve of that!) This was actually the first time I had toured the business end of the new brewery and was impressed by its scale. The towers of cans! Their beers always impress. The Mountain Girl hefeweizen whisked me back to Germany.

By the time we returned to Waverly to sample there, staring with a pitcher of excellent oyster stout—its neither vegetarian or kosher but def delicious—a group strangers had become beer drinkin’ buds. And all our footsteps mean my path is even more well-worn now. Prosit. 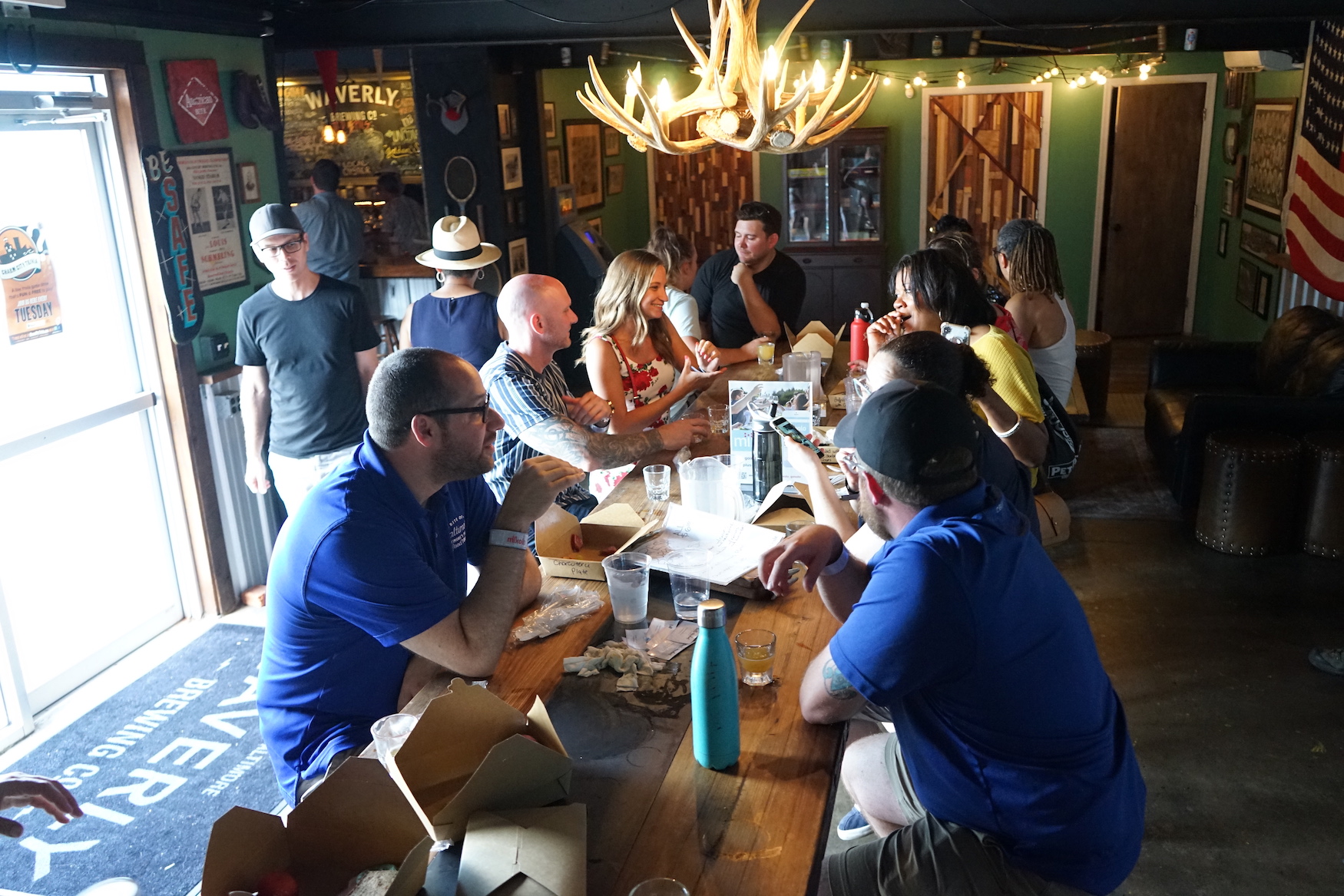 After a brew-tiful day, new beer-drinkin’ buds at Waverly.