January: Toast the Bard of the Scots 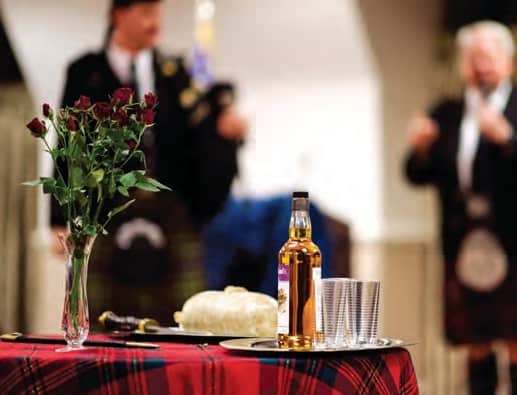 Fans of the Scottish poet Robert Burns gather each January to mark the 18th-century scribe’s birthday with ceremonial Burns suppers.

Pipes are played, speeches are read, haggis is consumed, and it should go without saying, toasts are made. Toasts with whiskey (If you’re Scottish, that’s whisky.), of course. Robbie Burns enjoyed a good dram himself, writing that whiskey “Twill make a man forget his woe; ‘twill heighten all his joy.” Think you don’t know any Burns? If you sing “Auld Lang Syne” at New Year’s you’ve intoned his work set to a folk tune.

While whiskey can be enjoyed year round, it seems to do its best “joy heightening” in the winter months. Sipping a warming whiskey on a frigid January night while snow piles up on the window sill just seems right—the same way slurping a boozy blender drink topped with an umbrella makes the most sense at a summertime swim-up bar. Long, dark nights are just made for the contemplative quality of a fine whiskey sipped neat or with little more than a splash of water. Add a volume of Burns and a comfy chair and you have a fine, winter’s night agenda.

The laddie poet drank Scotch, of course, which simply means whiskey made in Scotland. If you want to wet the whistle with spirits made in Maryland, the options are plentiful and growing. Baltimore’s Old Line Spirits has a line of American single malt whiskies made in the manner of a Scotch single malt. (Which is to say, distilled in a pot still from all-barley malt at a single distillery.) The line includes a peated version that’s smoky like an Islay Scotch. Rye is the state’s storied tipple, of course, and the most celebrated of the revival ryes is Baltimore Spirits Company’s Epoch Rye, the first straight rye (meaning at least two years old) made in Baltimore in some 70 years. It won a Double Gold medal at the 2018 San Francisco spirits competition. Over on the Eastern Shore, Lyon Distilling in St. Michaels makes rye and corn whiskey, while down in Southern Maryland, Tobacco Barn Distilling is one of the few in these climes to make bourbon.