January: Make a Pact with Yourself

The new year feels like a fresh start: an opportunity for do-overs of whatever went wrong last year or a chance to experiment with something new. Try the Maryland Sip and Savor 2019 cocktail, or head to the B&O Museum to sample picks from local wineries. Or get to work on those resolutions, whether it’s learning to sail or enjoying the great outdoors on a pair of skis or by plunging into the icy bay.

MAKE A PACT WITH YOURSELF 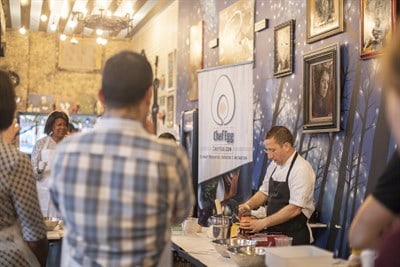 While nearly half of all Americans make New Year’s resolutions, only 8 percent actually keep them. That’s a lot of broken promises over the years—especially when you consider that, according to some accounts, the tradition is 4,000 years old. During the 12-day Babylonian New Year’s festival, people would promise the gods they would pay debts and return objects they had borrowed.

The most common resolutions include eating healthier, kicking up the exercise and stashing away more money, according to statista.com. Apparently, more than one-third of Americans routinely resolve to do all three. Maybe it’s hard to keep these promises because they’re simply no fun.

Here are a few ideas to shake things up a bit and add some spice to your resolutions. 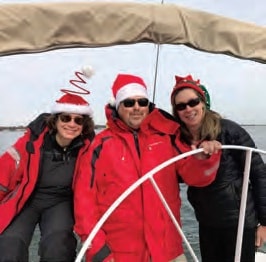 Frostbite Sailing Racing leagues in Maryland operate through the fall and winter. “You see the best breeze during the fall and winter months,” points out Scott Williamson, a fleet captain for the Severn Sailing Association. Plus, he says, “There’s never any boat traffic and the water quality is always good.” The leagues’ short races of about 12-15 minutes keep you on your toes. “With 20-30 boats that are tightly grouped, you must think and act quickly to sail competitively. Although it can be bitterly cold, you wear the proper gear and stay active the entire time. I seldom actually feel cold.” He admits he hasn’t raced with any newbies, but for the most adventurous among us, it could be quite thrilling. 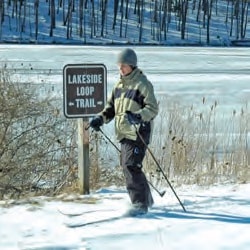 If skimming along on icy water isn’t your thing, how about gliding across snow? Head out to Western Maryland to New Germany State Park for a winter weekend of cross-country skiing. The park offers 12 cabins that sleep up to 12, with a four-bedroom cabin going for under $130 per night. Skis can be rented for $25 per day. There are a variety of trail levels, so you can work off the calories at your own pace.

Back to the water, how about taking a plunge for charity? At The Maryland State Police Polar Bear Plunge at Sandy Point Park (January 24-26), you can join more than 10,000 to help Maryland’s Special Olympic athletes. In 2018, the event, which features food, music and heated tents, raised $2.5 million for close to 8,000 athletes. 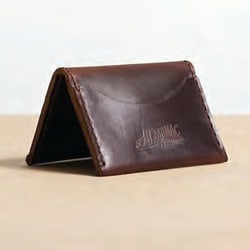 Need to get your money in order? Almanac Industries, a mom and pop handmade leather goods operation based in Baltimore, makes trendy retro leather clutches, handbags, wallets, card carriers (pictured above) and catch-all trays. Arrange for Whitney and Jacob Cecil to ship items to your home for free, or catch up with them at local holiday markets around Baltimore. Check the events page at almanacindustries.com.

After collapsing from dehydration during a professional lacrosse game, Jesse Hubbard became curious about what had happened—and why. He always drank plenty of water, but he realized he wasn’t getting electrolytes, essential for proper hydration.

But he was perplexed that sports drinks that touted electrolytes were loaded with sugar. “Most people I knew weren’t drinking much of these drinks,” says.

So Hubbard, whose lacrosse bona fides are numerous, and who was formally inducted to the National Lacrosse Hall of Fame in 2012, decided to make a hydrating drink that wasn’t filled with sugar, artificial dyes and sweeteners and other undesirable ingredients. He came up with Motive Pure, a naturally fruit-flavored concentrate to boost electrolytes. Just mix with water. motivepure.com

TURN UP THE HEAT

Haul and store your fireplace wood with this artful bentwood carrier, made by Mike Clarkson of Sun Woodworking. Clarkson, who operates a sawmill in Butler, forages the fresh oak and ash from the sawmill or from local loggers. The green wood is steam bent and held together without any hardware— just pegs at the base, says Clarkson. He found the design by researching Appalachian crafts. As for its capacity, “It’s as strong as can be,” he says. “It can hold much more than you’d want to carry.” sunwoodworking.wordpress.com.

SAY YES TO A SOFTER SHIVASANA 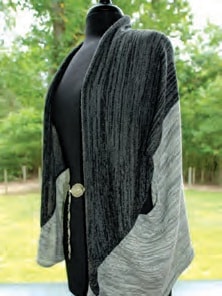 If your resolution involves yoga, you’ll be rewarded for hard work during shivasana (yeah, corpse pose) wrapped in this cozy shawl made from 100 percent alpaca. Angel Simmons, who owns Villa de Alpacas in Aquasco, claims that alpaca is the finest natural fiber you can buy legally and is warmer by weight than sheep’s wool. Plus it doesn’t itch, so works for those sensitive to wool—or those sweating after a hot yoga class.