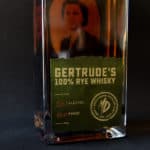 MISCellaneous Distillery launches a rye nod to the family matriarch

Dan McNeill, who runs Mount Airy’s MISCellaneous Distillery with partner Meg MacWhirter, says his maternal grandmother was a bit of a pistol. “She was known to drink whiskey and smoke cigars at family functions,” he recalls. “She was dainty and polite, but she also had a wild side.” The beloved matriarch died two years ago at age 93, but now her name–and her spirit–live on in the form of the newest Maryland rye whiskey to hit the market: Gertrude’s 100% Rye Whiskey.

Gertrude’s, which debuted June 23, is the distillery’s first aged whiskey and joins a liquid lineup that includes unaged rye, vodka and a couple of rums–including Risky Rum, which won a gold medal at this spring’s World Sprits Competition. “All the rye was grown locally and then milled on a gristmill from the 1800s,” MacWhirter says. The spirit, which true to its name uses an all-rye mash bill, was aged for seven months in 5-gallon, new oak barrels. MISCellaneous is also starting to age the rye in larger barrels of up to 30 gallons for future releases. A straight rye (two years old) may also be in the offing.

Grandma Gertrude, was known to knock back rye, and her visage graces each label of the new whiskey. Would she be pleased with her namesake tipple? “I think so,” McNeill says, calling out the 100-proof whiskey’s hints of burnt sugar, black pepper spice, and even strawberry. “We think it’s pretty delicious.”

Bottles sell for $75 and, at present, are only available at the distillery (114 S. Main Street, B103, Mount Airy), which is open for tours and tastings Friday to Sunday. For information, miscdistillery.com