Something to Crow About 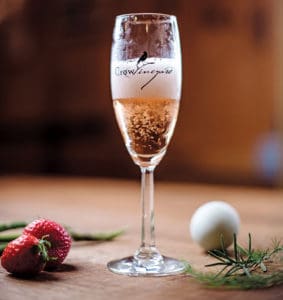 The Barbera sparkling rose is a treat for spring

The first time Roy Crow walked up the lane of his Kennedyville home with the woman he was dating, Judy Haggerty gasped. She saw green meadows dotted with black Angus cattle, a wood framed farmhouse surrounded by mature trees, a classic hay barn with a silo. “I said ‘people would pay good money to be here,’” recalls Judy, whose last name is now Crow. “Roy just laughed and said, ‘You’ve got to be kidding.’ I wasn’t kidding.”

When Roy and Judy met, she was working at a family services nonprofit in nearby Chestertown and he was county commissioner in Kent County. While Judy describes their meeting as “love at first sight,” she freely admits that the farm clinched the deal.

Roy had grown up here, but in 2001, had sold his dairy herd—keeping about 10 head of beef—and purchased an insurance agency in Middletown, Delaware. At the time, Judy says, “He was tired,” and was seriously thinking about selling the 325 acres that his family had owned since the 1940s. Judy wouldn’t let him.

As they launched into a new marriage in 2007, with five grown sons between them, Judy set about to save the farm. The couple, at the time each around 50 years of age, sunk their respective retirement savings into the project. They increased the cattle herd and began to sell individual cuts of meat rather than sides of beef sold by hanging weight. They converted the farmhouse into a bed and breakfast, and Judy began hosting farm-to-table suppers, with local chefs preparing meals for guests seated beneath tents on the lawn or gathered around grills on the patio. Local wine was usually served at these events.

The 30-plus chickens supply the B&B with fresh eggs for breakfast, while the herd of 100 black Angus cattle are another income source for the farm

Ever on the lookout for new income streams, Judy attended seminars about growing and selling grapes to the winemakers who were behind the burgeoning industry in Maryland. At one of these seminars, they met a consultant, John Levenberg, who offered to help them set up their own winery. Judy’s son Brandon Hoy, then 29 years old, volunteered to be the vineyard manager, and in 2010, they planted three acres of vines, half vidal blanc, half barbera. Judy says that Brandon, who had also worked on the B&B renovations, helped the couple embrace the new enterprise. “I’m not sure we could have done this without the enthusiasm and energy of the young people in our lives,” she says. Her other son Russell and his girlfriend, Lydia Gerres, operate a floral design company, Flora Boh in Baltimore, and frequently visit to help on the farm (and pick flowers to take back to the city).

Two of Roy’s three sons live in California, but one, Carl, an attorney in Washington, D.C., comes out to the Eastern Shore to smoke brisket from the Angus beeves, which Judy serves to guests for breakfast and in the tasting room. 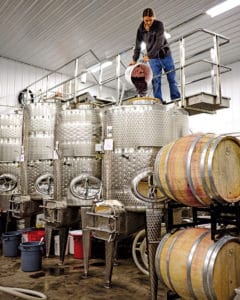 Brandon Hoy, the vineyard manager, working on a pump over, a procedure that stirs up the juice

In 2017, Crow Vineyard and Winery won top prize at the Maryland Comptroller’s Cup wine competition for its unoaked chardonnay, while the barbera rosé took the gold at the San Francisco Chronical Wine Competition. In years past, Crow has received gold medals, best in class and other awards for sparkling vidal blanc, merlot and its reserve red blend.

In 2017, the vineyard also hired a new winemaker. Michael Zollo, who grew up helping his grandfather make red wine for their large Italian family dinners, later leaving a job in the insurance industry to work at boutique wineries in California. Before coming to Crow, he was head wine maker at Fieldbrook in Humboldt county.

Though 2017 was a wet year with lower yields, says Michael, who started in June, the fruit was high quality, in part due to Brandon’s selective pruning. Once it’s in the barrel, Michael says, the wine will round itself out. While he loves to make rosés with a color deeper than blush, he says, “My goal this year is to make fruit-forward, fullbodied reds.”

In 2016, Crow’s operation produced about 2,500 cases for its own label and the same number for other wine makers, through alternating proprietorship contracts. Sharing their space and expertise, says Judy, “helps people make better wine.” It’s part of her larger goal of supporting the state’s wine industry. “We want to help the Maryland Wineries Association in any way we can,” says Crow, who has served as vice president and now president of the association. 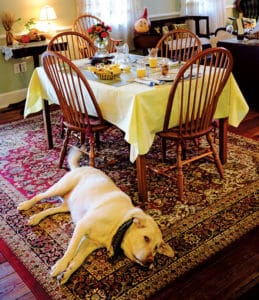 Myrtle, the yellow lab, likes to stake out territory near the breakfast table

And her mission with the myriad businesses, aside from protecting her and Roy’s investment, is to teach visitors about farm life, about living off the land and about making wine. About 100 visitors come for tastings and tours on a typical weekend day. “Our priority is to keep the farm authentic,” Judy says. “We’re not an event venue. We’re here to spend time with our customers and share our story.” And that story? “Sustaining the family farm.”