Flavors of the Free State 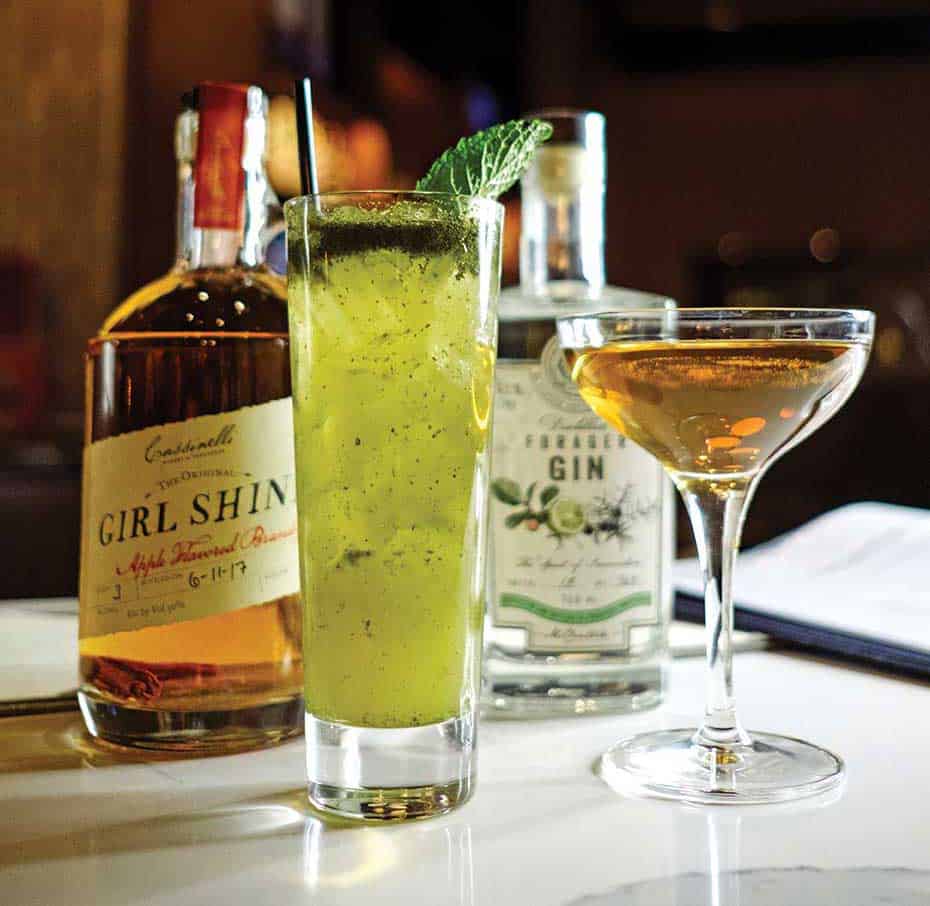 The Old Maryland Grill is all about local taste and tradition

There’s a moment early on in my conversation with Old Maryland Grill owner Mike Franklin when he tells me, matter-of-factly, “Oh, we took three separate trips to St. Mary’s county trying all of the variations of stuffed hams we could get our hands on for research,” as if it’s common knowledge that Southern Maryland is the epicenter for an old-school dish that I’d never heard of until this moment (The restaurant’s version is available on its lunch menu). But this obsession with veracity and locality quickly becomes a running theme as Franklin and Chef Josh Perkins discuss their approach to the new restaurant.

“Yeah, we also decided, once we realized we couldn’t get the type of southern cured ham we wanted, that we would just cure our own,” Franklin explains. “It’s about a month-long process.”

It should be noted that this bastion of all things local isn’t in one of Maryland’s trendy urban food neighborhoods. Instead, it’s directly across the street from the University of Maryland’s College Park campus. Not exactly a culinary destination—that is, until now.

And that’s exactly why Franklin decided to open the space on the ground floor of the swank new The Hotel. The area lacked high-end dining options, he says, “especially when people come in from out of town for football games, conferences or to rescue their sons or daughters from the dining hall.” 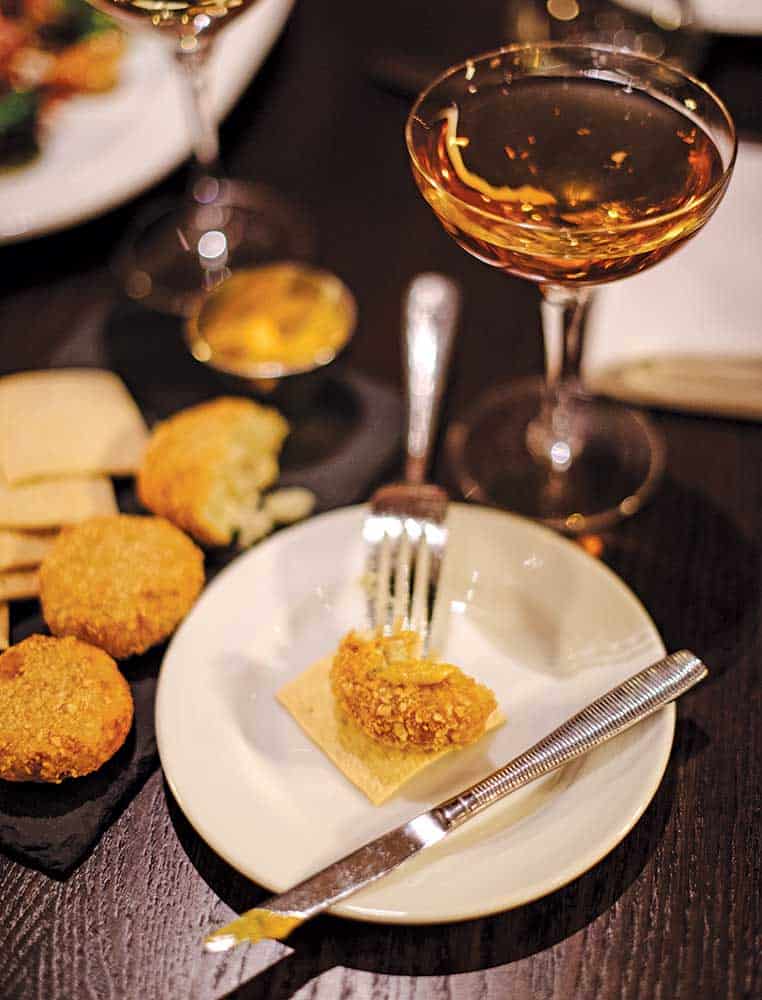 Coddies at the Old Maryland Grill

The Old Maryland Grill happily gives parents a place to treat their kids to a special meal. The restaurant opened in September 2017, and during our visit, we noticed a broad mix of students, neighborhood folks (some who greeted Franklin by name) and out-of-towners. The restaurant has two dining rooms and plain wood tables, some with red tufted banquettes. There’s also a raw bar, a stunning wine cellar with glass doors and ironwork with Maryland flag motifs.

Rows of wine bottles—many are from Maryland wineries—are displayed on dark shelves along one dining room wall. Franklin’s commitment to local goods doesn’t stop with the food. The bar shelves hold bottles of local spirits, the beer taps discharge local craft brews, and the cellar is stocked with wines from Maryland grapes.

Kevin Atticks, executive director of both the Wineries and Brewers associations of Maryland is impressed with the breadth of the drinks available. “This place has one of the best, if not the best, local beer, wine and spirit menus I’ve ever seen,” he says. Atticks, who is also the founder of Grow & Fortify, a firm that helps local agriculture and food businesses, joined Franklin at our table for dinner—and drinks. We sipped a glass of full-bodied chambourcin reserve from Southern Maryland’s Port of Leonardtown Winery. The lush red oozes with berry flavors, ending with a mature oaky tannin that shows just how far the Maryland wine industry has come. Similarly, the Diamondback cocktail (a relatively unknown recipe created in Maryland in 1951) shines with the use of Girl Shine apple brandy from Chestertown’s Cassinelli Winery while all 24 of the beers on tap are brewed within the Old Line State.

Atticks explains that the growth in the beer and wine scene in Maryland has been extraordinary over the last decade, though a lot of places are still relatively unknown. He rattles off a few: Cool Ridge Vineyard near Hagerstown features picturesque rolling fields; Old Westminster Winery near Frederick boasts a brand new tasting room; Union Brewing is moving into a huge new space in Baltimore in 2018; Crow Farm and Vineyard on the Eastern Shore makes an award-winning barbera rosé that everyone at our table couldn’t get enough of, and Atticks says that’s just the tip of the iceberg for Maryland’s craft beer and wine industry. 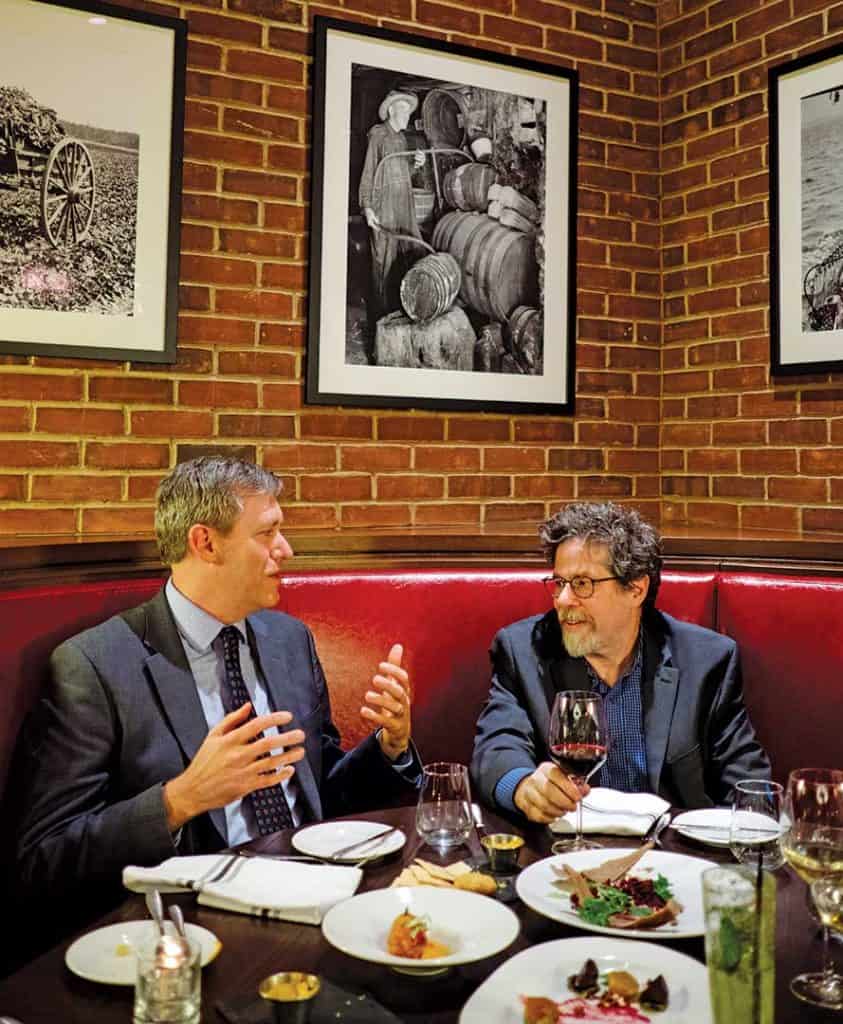 Kevin Atticks, left, of Grow & Fortify, and Mike Franklin, owner of the Old Maryland Grill, are advocates for local food and drink.

It’s clear that Franklin feels as strongly as Atticks about supporting Maryland beverage makers. Franklin, after all, also owns Franklin’s Brewery, a beloved spot in nearby Hyattsville that’s been a student mainstay since 2002. When he was approached by The Hotel group about opening a restaurant in the space, Franklin knew exactly what he wanted to do: focus on everything great about Maryland’s past and present.

“We spent the first six months just poring over old Maryland cookbooks, trying to see what would translate into the current dining scene,” says Chef Perkins. Some things they modernized for today’s tastes, and other dishes, like a jello-mold-like recipe for tomato aspic, he laughs, “We quickly skipped past.”

Some of those Maryland-inspired dishes shifted shape somewhat, like the Chesapeake rockfish entrée that, using locally grown lemongrass, introduces an unexpected but welcome Thai spin on a standard. The kitchen sticks with tradition for the coddies however, serving the potato and fish croquettes on crackers topped with house-made mustard. “You’d be surprised how easy mustard is to make,” Perkins says, explaining that everything on the menu is made in-house, even the crackers.

Thick-cut slices of the aforementioned house-cured ham, boasting of salt and smokiness, are nestled into slider-sized biscuits that are as light and crumbly as anything you’d get on the Eastern Shore. And the Marylandstyle fried chicken has a story all its own. During the months that Perkins and Franklin were working on the menu, Franklin says, “Every Friday seemed to be fried chicken Friday.” They sampled so many variations trying to hone in on just the right technique, he says, “I lost count.”

The result stands up to any fried chicken I’ve had in recent memory. The batter is thick and crunchy without being too greasy and the chicken inside is impossibly moist (even the white meat). But the real kicker is the spicy, black pepper-specked white gravy served alongside for dipping or drizzling over the crispy chicken. “That’s what makes it Maryland style,” proclaims Franklin, who nudges me to be less thrifty with the gravy.

The whipped potatoes that come with the chicken are so dangerously rich that after one heaping spoonful, I move them as far away as possible, for fear of going down a road that ends in me licking the bowl.

Any Maryland-inspired menu has to include Maryland crab cakes and in a state where it’s hard to set yourself apart from others, the restaurateur has found a way to use Maryland crab year-round. “I bugged a local crabber on the Eastern Shore for two years to supply our crab,” Franklin says. In October, when the crabs are their fattest, the supplier (Franklin won’t reveal the identity) freezes the meat with liquid nitrogen so the Old Maryland Grill has fresh-tasting lump throughout the seasons. “We had to have Maryland crab in our crab cakes,” he asserts.

Atticks jumps in to remind us. “That crab pairs perfectly with the chardonnay from Old Westminster,” he says with a smile.

Soon after we’d devoured the crab cakes, a plate of towering Smith Island cake is brought to the table. It’s another Maryland staple, with its dozen or so layers striped with chocolate frosting, that Franklin insisted on. When I foolishly ask where the restaurant sources this infamously laborious dessert, Franklin, looking at me as if I should know that answer by now, simply points to the kitchen, “right in there.” Join the Club! Celebrate Maryland’s tradition of Thoroughbred breeding and racing. Join the Maryland Thoroughbred Club and enjoy many member benefits, like our monthly magazine Mid-Atlantic Thoroughbred, a beautiful award-winning publication all about breeding and racing in the region. Get the inside scoop on all the Thoroughbred happenings with our Weekly Bulletin, the Maryland Horse Breeders Association’s digital newsletter. Receive exclusive invitations to events like the recent Renaissance Awards held at the Sagamore Pendry in Baltimore, the annual Maryland Million Gala at The Maryland Club, Maryland Million Day, educational seminars and other fun events throughout the year. Join the club, get involved, and be part of this exciting Maryland tradition. Call the MHBA Today 410-252-2100 x122 or go online www.MarylandThoroughbred.com